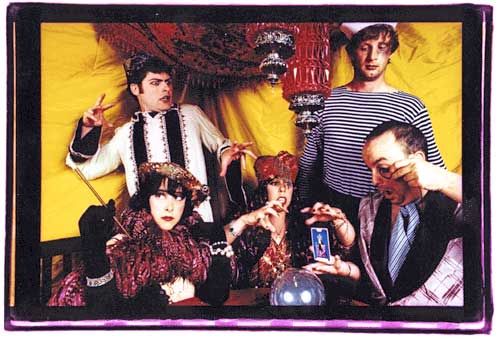 I feel a wee bit previous about this week’s top new tune since it isn’t released until March 22nd. But fuckit, I can’t avoid it any longer! The tune is ‘Sixteen Military Wives’ by the wonderful Decemberists. It’s from their new album, ‘Picaresque,’ which is coming out on Kill Rock Stars. The album is gorgeous, being entirely like a four-course-meal in the famine that is the current indie pop scene. Yes, it has real songs on it, not vague restructurings of Gang Of Four b-sides. Do you remember songs? I’m hoping the sheer poppiness of this album brings The Decemberists all the fame / money / left-handed potrzebies they desire. I also hope that they one day do a cover version of Split Enz’ ‘Six Months In A Leaky Boat,’ a rollicking, nautical tune which they were born to do. But that’s another matter. Put your order in for the album now unless you hate all pop music ever.

The best old tune was ‘Big Decision’ by That Petrol Emotion. Formed out of the ashes of The Undertones, TPE were a classic ’80’s indie band. Not “indie” in the way it’s mis-represented by the coke-addled hacks at Q and Mojo but in the true sense: TPE were political, experimental and confrontational. Today’s corporate chart schmindie is a poor relation, it merely follows whatever template sells. One week angular guitars, the next bleeping synths, the week after, angsty mockney dirges. TPE had brains, soul and better pop songs than today’s gutless, whining whores.