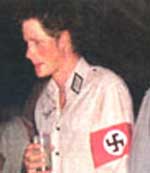 The heir to the throne, another posh fucking moron

This is the best comment about the whole stormtrooper-in-a-teacup:

The Trouble With Harry

Having been regularly beaten up from around the age of eight by lads sporting swastikas, I didn’t really see the funny side myself. Fascism killed tens of millions and if you’ve had the privilege of being sent to Eton (at the British taxpayers’ expense), you should know that. What kind of fucking idiot goes to a party in 2005 themed ‘natives and colonials’ anyway?

But of course, I don’t think he’s a Nazi. He’s just another right-wing, idiot aristo. Why is anyone surprised at that? Look at his grandad and his racist spewings. Harry’s just another chip off the same old diseased block. Remember how fond Edward and Mrs. Simpson were of Herr Hitler? The British monarchy has more than just blood ties to Germany.

The ultimate irony is that swastika is taken from the Sanskrit word ‘svastika.’ It’s a Hindu religious symbol. So the bootboys who used to beat the crap out of me were actually embracing my culture. Even as they were demanding my family’s death/repatriation, they were active multiculturalists.