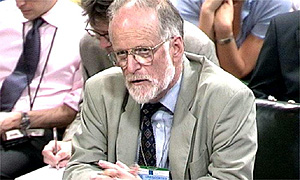 Two paramedics who attended the scene where weapons expert David Kelly was found dead have expressed surprise at the official inquiry’s conclusion.

The Hutton Inquiry found he died as a result of a slit wrist in July 2003.

But the medics said the small amount of blood they saw around the body was inconsistent with the cut on his wrist being the cause of death.

They spoke to the inquiry and Thames Valley Police, who say the investigation will not be reopened.
(Source: BBC News)

The pathologist questioned in the above article believes the paramedics are mistaken. So, the question is basically how did Dr. Kelly die?

But in a statement from the Kelly Investigation Group, an orthopaedic and trauma surgeon, Bill McQuillan, said: “The blood spurts out with each heartbeat and may reach distances of six feet or more.

“If this was the case with Dr Kelly, his clothes, face and any surrounding structures would show evidence of that with the blood scattered as from a watering can …

“When you put this evidence together with other pieces, including the fact that Dr Kelly’s body appears to have been moved from slumped against a tree to flat on its back – and we know photographs are in existence to prove this – then it illustrates the need for a full inquest where all this can be properly investigated.”
(Source: The Guardian)

We’ll probably never know. It’s an incovenient question and, as such, it’s being ignored after a slapdash whitewashing by Hutton. And anyway, perhaps the question we should be asking is why Kelly died.

I believe that Kelly died as a result of the actions of the British government. He hinted at the turmoil around him when he spoke of “many dark actors playing games.” He didn’t mean the BBC by this, he meant Her Majesty’s Government.

We can only guess at the situation that lead to Kelly’s death. With the police turning a blind eye and the government smugly content with the Hutton cover-up, we may never know anything more concrete than that.