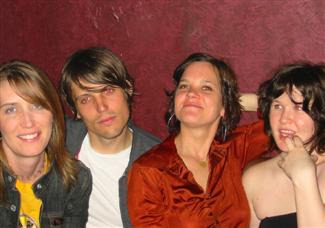 This week’s top track was ‘In The France’ by Shesus. It’s from their new EP on Narnack Records. There’s a tremendous surge of energy on this EP, shouty and poppy guitar indie with some very catchy choruses. Check it out if you’ve ever liked The Pixies, Sleater-Kinney or other classic muscular rawk.

The best old tune was Neu!‘s ‘Hallogallo.’ In this single track from the 1972 debut album, you can hear the foundations of so much later alt-rock. Whether it’s Stereolab or David Bowie, they’ve all nicked a bit from Neu! But before I add to the glowing Krautrock revisionism, I reckon you should read this. It’s sad, funny and all too familiar.

(Please follow this link if you’re not familiar with basic memetic theory.)

I’ve just spent the last hour working out the chords to The Shins’ ‘New Slang’ and singing it over and over till I’m a bit hoarse. I think I’ve just had the memetic equivalent of a horrendous fever which has broken tonight.

It all started so simply…

…last year, like 250,000+ other pop kids, I was enthralled by The Shins album ‘Chutes Too Narrow.’ So, naturally, I went back in time and bought their first album and then back into Flake (Music). The earlier stuff was lovely too but I thought ‘Chutes’ by far the poppiest and most accessible. When I DJed last year, I played songs from that album.

I went to see The Shins and The Stills play in Notts (look here!). I remember they did ‘Kissing The Lipless’ beautifully. They may have done ‘New Slang’ but I’m not sure. But what I do know is that I played it DJing for the first time three days after that gig. Hmmmm…

At first, the symptoms of my memetic plague were mild. I’d occasionally find myself humming the catchy Am – C – F – C intro bit. Nothing too heavy, I can handle that. Then I put the track on a CDR for my car. What the hell is he singing about? Gold teeth? Bakers bleeding into their buns? The opacity of the lyrics hooked me further.

So, like all dark obsessions, I turned to the internet to slake my desire. Up came a gzillion lyrics sites. Dang – they’re even more barmy written down! But hellishly catchy.

I guess the infection bloomed exponentially from that point. I couldn’t escape. I kept humming the intro, the verse, the whole damned song. Going round in my head with those gorgeously simple folk chords chiming. I thought it was calming down but then the bloody TV ad for Garden State featured a snippet of the song! Arrghh!

Like biological agents, memes aren’t universally infectious. A lot of people I know don’t like The Shins. They could hear ‘New Slang’ and be completely un-affected by something I consider quintessentially poppy. Similarly, a lot of people can’t stand music with simple chords. The whole of the song uses just four chords: Am, C, F, G (maybe five cos I think they chuck in a C7).

I knew before I worked the song out that it’d be chords like that. How? Because that’s what my brain seems to be wired for. Whether they’re played by Erik Satie, Louis Jordan or Kraftwerk, I love those simple, classic pop shapes and progressions. I never tire of them, as long as they’re manipulated inventively. That’s why I love folk music. Whenever I like a song, and then work it out, I find out that the chordal structure is invariably very simple.

Conversely, I’m not a huge fan of post-1937 jazz because complex chords leave me cold. It becomes too muddy for me, too dissonant. I obviously hear a different music than jazz lovers.

So, I have no memetic resistance to simplicity, folk tunes, country songs. I love repetition with slight variations so I also love electronic music (which is handy, since I make it). Whereas, I figure someone whose favourite artists are Mingus and Coltrane probably would find most of the music I love fairly dull and unadventurous. They’re resistant to simple music, much as someone can be resistant to a particular strain of flu.

Of course, I’m leaving out loads of other factors here, like how trendy a band is, whether you fancy them, etc. Those are all memetic infection vectors in their own right.

I suppose this post is quite ironic in that I’ve had many people tell me how irritatingly catchy ‘Your Woman’ was. But now you understand why it had to be: it’s in the nature of my brain/mind itself. When I first heard that trumpet riff, I knew I had to nick it, it was sooo catchy. And yet, it’s just three simple notes. Nothing complex at all, over equally un-adorned chords. Not a diminished or augmented in sight.

Now it’s 4am. The song is still going round my head and I’m tempted to go into my studio and sing it again…

Gold teeth and a curse for this town…

P.S. Exactly the same thing happened with Nas’ ‘Get Down.’ I must have listened to that song hundreds of times while I was working out all the lyrics, repeating them till they were perfectly in sync with Mr. Jones, line for line. I have no idea who Nicky Bars is but I now know what he pushed in the ’70s. With Nas, his amazing rhythmic timing is the infective meme. You have to replicate it.

P.P.S. In writing this, I’ve just become a carrier for ‘New Slang.’ Some people will read this and go on to check out the song, thus becoming infected themselves. Yes, I have memetic lurgy