I can’t find any pics of this on the web so far but I’m watching the TV news and it’s full of Canadians protesting Bush’s visit there. They’ve just pulled down a statue of Bush in an event as staged as the original US-managed Hussein-toppling.

Bush tried to make the best of it but the pictures of the thousands of demonstrators were another example of how Bush is viewed in the world: as a pariah. Millions may love him in America but the rest of us see him as a war criminal and someone that deserves to be behind bars just as much as Osama Bin Laden.

Another great link that I found via NTK. NTK pointed me towards My Society and that took me to They Work For You.

Just type in your postcode and find out how much your MP’s actually been doing for the whacking great salary they pay themselves (not including their immense expense accounts). So, what’s Bob Laxton been up to? This:

This MP never rebels against their party — 582nd out of 650 MPs. (From Public Whip)
(Source: They Work For You)

Hmmm… pretty good on replying to faxes but missed a quarter of the votes. Why? Couldn’t be arsed?

Never rebels against New Labour… oh dear. Is that loyalty to a leader who’s a war criminal based upon stupidity or evil?

Why not check up on your MP and see how they’ve been representing you. If you think they’re shirking… well, let them know at the next election.

I’ve now had about four or five peeps come up to me to thank me for putting them onto UK Resistance. So, what the hell, I may as well plug the equally always excellent NTK.

Like UKR, it’s very geek-orientated so if you’re quite normal you’ll probably find it dull. If, however, you take pride in the fact that your watch is also a calculator, then I can safely say that you’ll love NTK. Where else but NTK would I have found this bemusing link? :

Or this even more baffling and slightly worrying example:

And where else would I find a link to this tribute to the infamous goatse.cx? :

I know my life is more complete now that I’ve seen this tribute sandcastle goatse: 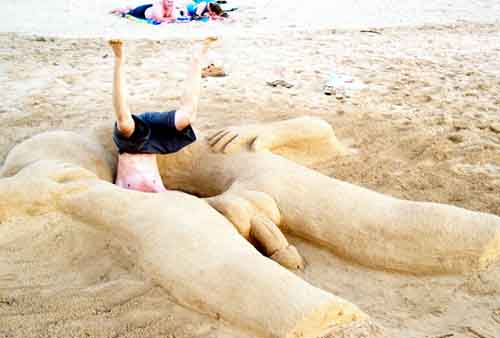 Yes. The internet at its shining best. Brought to my bleeding eyes thanks to NTK.