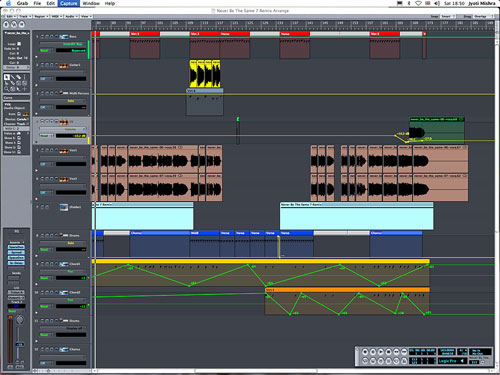 I haven’t been writing much on here lately because I’ve been finishing off a remix I’m doing for The Jeunes, an excellent up-and-coming band from Seattle.

One of the reasons it’s taken so bloody long is that I recently upgraded to Logic Pro 7.

And it’s been hell.

The previous version, 6.4xx, was bomb-shelter stable. I could try and make it topple over and it would just keep ticking on quite happily.

It’s unusable for professional work. Just today, I was tweaking the final mix and it started refusing to play the song. The first bar would play and then audio would stop, even as the screen scrolled through the song. It said it was playing but it wasn’t. Then it crashed out completely to the desktop, with that ever-infuriating ‘send error report to Apple’ window popping up. I tried to play the song around twenty times, muting or freezing different tracks. It made no difference: audio kept cutting out and then Logic crashed. So I had to roll-back to an earlier version that worked and re-create, as far as possible, what I’d lost in the crashy version.

This is not how a professional piece of software should behave.

I think the culprit is the new AU Manager that’s been implemented in version 7. Why? Well, it seems to be the major thing that’s changed in the upgrade. Plugins that worked perfectly fine with 6.4 are now deemed unusable and fail to load. Other plugins which are verified and loaded, like Albino 2, crash Logic to the desktop if you try to save a preset within them. But according to the Linplug site, Albino 2 works prefectly with the AU Manager. And the AU Manager says that too. So why does trying to save crash Logic, eh?

Working with Logic now is like trying to balance a spinning tea-tray on a bit of bamboo. You can fool yourself that you’ve got the hang of it, that it’s quite predictable but sooner or later you’ll have scones on the floor and a dent in your head.

I scoured the official support pages but found no help. This snippet was the most use:

Audio Units plug-ins which “failed” or “crashed” the validation test, can be enabled—but be aware that these plug-ins can cause problems. Use of plug-ins that have crashed the validation can negatively affect the test results of subsequently scanned plug-ins, can cause Logic crashes or even lead to data loss (destroyed song files).

Which sound like what’s happening to me. But I’m not using any AU plugins that failed validation.

Finally, I had to export all the tracks as audio and import them into a new song in Logic 6.4, losing any tweakability totally. So, I managed to finish the remix but the whole process took me around ten or twenty times as long as it was meant to.

Thanks to Logic Pro 7.

I might try to find the huge box it came in and give it a good kicking.