I’m watching the ITV news about the resignation of Colin Powell. What complete, utter bullshit.

They’re painting him as some kind of moderate. Moderate? I suppose if you called Speer a moderate Nazi, then Powell is a moderate in relation to the PNAC cabal who now run America.

At this moment they’re talking about Powell’s glittering career as a military man. Here’s a photo from his great war past: 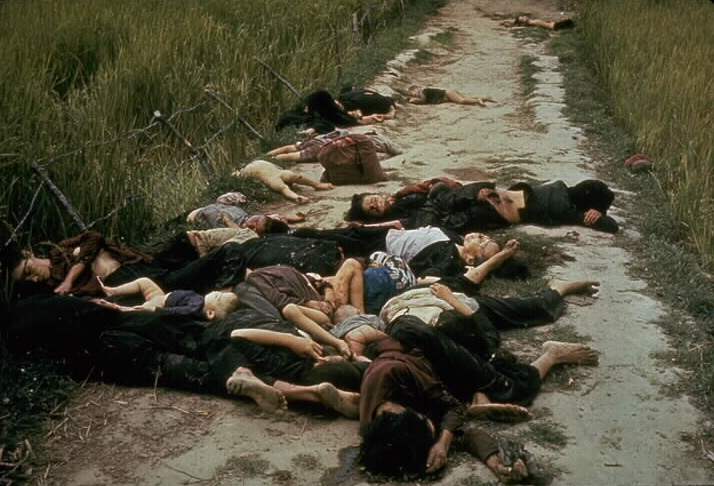 That’s an image from the My Lai massacre, when US troops slaughtered innocent Vietnamese civilians much as they are doing in Fallujah as you read this. Was Colin Powell a brave whistle-blower, bringing those responsible for these war crimes to justice? No.

Colin Powell, then a young US Army Major, was charged with investigating the massacre. Powell wrote: “In direct refutation of this portrayal is the fact that relations between American soldiers and the Vietnamese people are excellent.” Later, Powell’s refutation would be called an act of “white-washing” the news of the Massacre, and questions would continue to remain undisclosed to the public.
(Source: Wikipedia)

What about the first Gulf War. Wasn’t that a glorious, surgical campaign? Colin Powell came out of that one smelling of roses. Not surprising with the way the media was mangaged in that conflict. Like the revisionist history of the US invasion and butchery of Vietnam, that war was a total whitewash too:

It wasn’t until late in the afternoon of Feb. 25 that the press pool was permitted to see where the attack occurred. There were groups of Iraqi prisoners. About 2,000 had surrendered. But there were no bodies, no stench of feces that hovers on a battlefield, no blood stains, no bits of human beings. “You get a little firefight in Vietnam and the bodies would be stacked up like cordwood,” Daniel said. Finally, Daniel found the Division public affairs officer, an Army major.

“Where the hell are all the bodies?” Daniel said.

“What bodies?” the officer replied.

Daniel and the rest of the world would not find out until months later why the dead had vanished. Thousands of Iraqi soldiers, some of them alive and firing their weapons from World War I-style trenches, were buried by plows mounted on Abrams main battle tanks. The Abrams flanked the trench lines so that tons of sand from the plow spoil funneled into the trenches. Just behind the tanks, actually straddling the trench line, came M2 Bradleys pumping 7.62mm machine gun bullets into the Iraqi troops.

“I came through right after the lead company,” said Army Col. Anthony Moreno, who commanded the lead brigade during the 1st Mech’s assault. “What you saw was a bunch of buried trenches with people’s arms and legs sticking out of them. For all I know, we could have killed thousands.”
(Source: Digital Journalist)

As for Iraqi civilians in the first war, Powell said at the time he was “not terribly interested” in how many of those the US had massacred. Civilians? They don’t matter unless they’re American.

EDIT
I’ve now watched five or six TV news reports. All of them say “Powell, who was seen as a moderate.” It seems to be a line passed round, like some kind of White House briefing.

This “moderate” Powell, is he the same Powell who did a Kruschev at the UN, declaring that the US knew, beyond a shadow of a doubt, that Iraq had numerous WMDs and bioweapons? Is this the same “moderate” Powell who bribed and bullied nations like Spain into supporting the illegal invasion and massacre of Iraq?

I’ve also seen two or three web news reports calling Powell “a dove amongst hawks.” Yes, a professional solider, a concealer of war crimes, definitely sounds like a dove to me. Just how much bullshit are we meant to swallow before we vomit? There’s a pile of 100,000+ Iraqi dead and their blood is on Powell’s hands.

Remember that when you see all the fawning, myopic coverage of this “great leader” and his resignation.