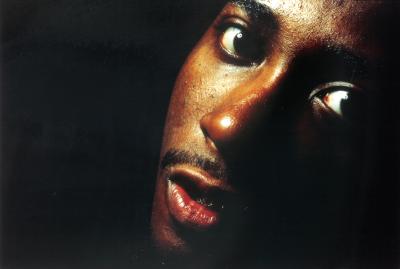 Ol’ Dirty Bastard, one of the rap world’s most colorful characters and biggest troublemakers, died Saturday afternoon, after collapsing at the Wu-Tang Clan’s Manhattan recording studio. He was 35, and would have turned 36 today [Monday 15th].
(Source: NJ.com)

For anyone who’s ever loved hip hop, ODB’s death is like a kick in the gut. The man was a stone-cold genius, his flow was revolutionary.

When I first heard ’36 Chambers,’ 11 years ago, it was such an insane record it made my head hurt. Of course, now everyone knows the Wu sound, the lurching, rattling, schizoid funk that they invented. But back then hip hop was still in the thrall of the super smooooov West Coast g-funk sound. The hyper-quantised beats, regulated rapping and widdly leadsynth lines had become sterile. Wu destroyed that dominance as surely as grunge killed bighair metal.

ODB’s first solo album proved his passion, the way he leapt into his art, giving everything to it. He had the best timing ever. ‘Brooklyn Zoo’ is surely one of the best songs ever recorded, the collision of the one-legged piano riff with ODB’s rapping is awesome. And then he came out with ‘Nigga Please.’ What a record – seventy shades of crazy shit, even including a consummate pop hit in ‘Got Your Money.’

ODB, I’ll miss you. The world has lost another innovator, another musical visionary.