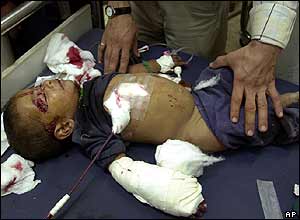 Take a look at the picture above. That’s one of the Iraqi “insurgents” that are being massacred in the massive US assault on Fallujah that started today. This young boy’s father was killed in a US bombing attack. He survived. For now.

The above picture is the truth behind all the US propaganda. They portray Fallujah as being a nest of vipers, as being only inhabited by hardened fighters. It’s not, there are still many tens of thousands of ordinary people living there:

For people in the city, life has become even more extreme.

Food is in short supply and the shops are all closed in anticipation of the looming attack.

Electricity is cut off because of damage to the main power station from the bombardment. The water supply has been cut off too. The roads are now heavily cratered.

People, particularly children and women, tend to stay at home, fearing being mistaken for a military target.

Doctors say medical supplies at the main hospital, which has been in American hands since Sunday, are low.
(Source: BBC News)

But surely this attack must be okay? It was sanctioned by the Iraqi PM, after all?

William Polk, who served President John Kennedy in the state department, wrote recently: “Most Iraqis regard the government as an American puppet. The idea that America can fashion a local militia to accomplish what its powerful army cannot do is not policy but fantasy.”
(Source: The Independent)

According to the article that quote was taken from, by the US government’s own standards, the attack on Fallujah makes the USA into a terrorist state. For once, I agree totally with the US goverment.

Here’s another picture created by the brave “liberators” of Iraq: 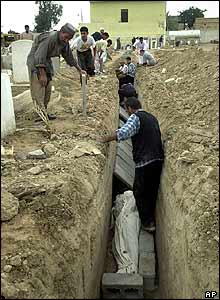 Those are the mass graves of people slaughtered by the US bombardment. You won’t have seen those pictures on TV because we killed those people. Our military, the US and UK jointly. We only see mass graves on TV if they’ve been created by Saddam Hussein or another official enemy. These Fallujah dead are irrelevant to the Iraq invaders.

Fallujah was a city of 500,000 people. The continuous attack by the US military has killed many of those civilians. How many? We’ll never know because the American government doesn’t care about civilian casualties.

This city has been be-sieged and strangled by the US. They’re murdering it. And every British citizen who doesn’t protest at Blair’s complicity in this war crime is taking part in that murder.

If you don’t do something about Fallujah, you’re just as guilty as the Germans who turned a blind eye when their Jewish neighbours were herded onto trains.

What are you going to do? 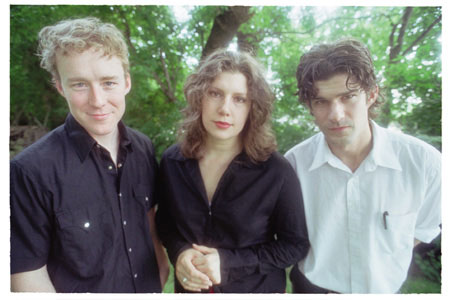 This week’s top new choon was by ‘Monkey’ by Low. It’s a brooding, chugging slab of menace and I don’t know what the hell it’s about. Except I’m glad I’m not a monkey. It’s from their new album which is not out till January 2005 (Sub Pop in the US, Rough Trade over here) so Bless punters tonight got a very special early preview. Get your pre-orders in now, it’s a belter of an album!

The best old track tonight was by Belgian electrodisco masters Telex. I’ve wanked on about Telex before: they’re one of the great lost synthpop bands, unless you were alive at the time, you’ve probably never heard their music. Which means you’ve missed out on some of the most subversive, catchy pop ever made. In 1979 they got in the UK charts with their cover of ‘Rock Around The Clock’ and when I heard it, I fell in love. With synths, with vocoders, with Telex.

Haven’t we met somewhere before?