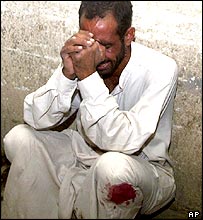 Tonight has been full of booms and whistles, electric flashes and echoing, stuttering reports. A typical Bonfire Night. As I was driving to Long Eaton earlier on, the road was lit up in saturated bursts, rockets exploding over Acorn Way.

I was warm in my car, a hot meal in my fat belly, feeling safe and snug.

Now, at just coming up to 12.30am, most of the fireworks have died off. They’re over for another year.

But in Fallujah, their fireworks are just about to intensify. The US military has been pounding this civilian city for months, trying to kill any resistance to the US occupation and their puppet government. Of course, the US government claims that any bombing has been targeted at known “insurgent” hideouts. Anyone who doesn’t agree with the US occupation of Iraq is an insurgent. Which means that most Iraqis are insurgents and therefore, in a twisted way, the US military is targeting insurgents when it kills unarmed civilians cowering in their wrecked, cracked city.

Now, the US “liberators” are gathering their huge array of bombs and missiles in a new offensive against Fallujah.

It’s no coincidence that this offensive is taking place now. The election is over, if the attack goes badly (which in US terms only means excessive US casualties) you can’t take your vote back, can you? Bush waited rather than have shots of bodybags on the eve of an election. Some would call that politically shrewd, I’d just call it evil.

When I hear bombs falling around my neighbourhood, I keep thinking – any moment now, I could be killed.
It is worst during the night, when the bombardment is most intense.
If a big bomb lands somewhere nearby, you often hear crying and wailing afterwards.
It is a very strange feeling because in between the screaming, there is the sound of more missiles flying.
That is when I think – I could be next.
Another sound you hear during the bombing is that of prayers. People pray loudly because they are so scared.
Sometimes, you hear people say quite unusual things – they improvise, making up their own prayers.
(Source: BBC News)

Do you remember how the Iraq invasion was sold to the world? Apart from the hunt for non-existent WMDs (now conveniently sidelined by Bush and Blair), it was sold as a liberation. The Iraqi people would pour onto the streets, welcoming the gum-chewing GIs. Happy Iraqi kids, smiling and giggling at their brave Western friends!

Use your eyes. Read the reports. Is that how it is?

All this talk of gangs of insurgents – if the Iraqi resistance truly was a handful of extremists, surely the best-equipped, best-trained military in the world could have beaten them by now? What you actually have in Iraq is an invading, occupying army being fought tooth and nail by the ordinary population.

Every time one of the invaders’ bombs kills an Iraqi, it simultaneously creates an enemy, an Iraqi who will remember the dead and hate the invader forever. And fight them at great personal risk. Can you imagine how terrifying it must be to fight the US military, with their Black Hawks and missiles and laser-guided bombs? And you’ve got perhaps some stolen mortars or an old Soviet bazooka? How desperate and angry must you be to take on the US forces?

There have been at least 100,000 Iraqis murdered by the invading Western forces. How many “insurgents” does that create?

Let’s turn this round…

Imagine if the Soviets had invaded the USA, as a pre-emptive attack. Imagine they’d laid siege to Oklahoma City (roughly the same population as Fallujah pre-siege). Imagine that they’d cut off all the roads in and out, stopping food shipments, everything. And then proceeded to shell it every single day, indiscriminately. Now, would the average American be happy with that? Say someone watched their family get blown to bits by a Soviet rocket attack, would they think, ‘Well, this occupying army is obviously just, I shall go and surrender to their authority.’ Or would she/he grab whatever weapon was available and try to kill as many Commies as they could? Of course, the Soviets would label anyone resisting them “counter-revolutionaries” which is nearly as handy a tag as “insurgent.”

During the fireworks tonight, I was trying to imagine what it must be like to be living in Fallujah now, to hear the continuous sound of the world’s mightiest military bombing your hometown to the ground. I imagined every bang to be a mortar landing nearby, every whoosh to be the trail of a guided missile. And the only choice you have is to leave your home, possibly ending up in a US torture camp, or stay in it and die.

And while you’re hiding in the dark, wondering whether you’re going to die before the food runs out, you can hear the sound of different fireworks in the sky.