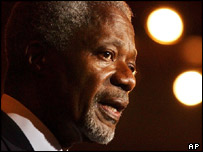 The United Nations secretary general, Kofi Annan, declared explicitly for the first time last night that the US-led war on Iraq was illegal.

Mr Annan said that the invasion was not sanctioned by the UN security council or in accordance with the UN’s founding charter. In an interview with the BBC World Service broadcast last night, he was asked outright if the war was illegal. He replied: “Yes, if you wish.”

He then added unequivocally: “I have indicated it was not in conformity with the UN charter. From our point of view and from the charter point of view it was illegal.”
(Source: The Guardian)

If the Iraq War was illegal according to the UN charter then it was/is a crime. Since Blair is the person who pushed the UK into this illegal act, he is a criminal. Since the act was war, he is a war criminal.

But, as always, what counts in society is not what’s done but who does it.

For example: if you fiddle your dole money, a few quid here or there, that’s a terrible, terrible crime. In fact, our taxes pay for those bullying TV adverts about dole fraud. They must have cost a bit, eh? And yet, the greatest loss to Britain is not by poor people trying to supplement their meagre dole money, it’s by fatcats like Rupert Murdoch evading their tax payments, whether corporate or personal. And if a boss is actually ever brought to justice and jailed, this happens:

Mr Saunders [Guinness boss convicted of massive fraud] had his five-year sentence halved on appeal, and was released from prison after only 10 months when a medical report said he was suffering from the irreversible brain disease Alzheimer’s.

Mr Saunders was unable to recall three numbers backwards, or to remember the name of the US president, a psychiatrist said.

Since his release, Mr Saunders has worked as a marketing consultant for the likes of Carphone Warehouse, and is said to consider the Alzheimer’s diagnosis an error.
(Source: BBC News)

What an amazing, convenient recovery, eh? It’s not so easy for poor people to get out of jail.

Or how about murder? Think of all the horror and fear generated by the various shootings in America and Britain. Terrible crimes against innocents, people being picked off by psychopaths with sniper rifles or machine guns. But those acts weren’t really that bad, were they? How can they be when the people carrying out the very same acts in Iraq against unarmed civilians are given medals and talked about as heroes? Perhaps the US Army should just take a shortcut and recruit bullied, geeky high-school kids. Give them a machine gun and let them loose in Fallujah – then given them medals for all the kids they kill. There’s nothing wrong with murder as long as you slaughter the right people. That’s the truth behind the crocodile tears of bastards like Bush and Blair.

I waited a day before posting about the Annan statement. I knew that it would immediately be rubbished by the UK, US and their spineless collaborators in the illegal invasion of Iraq. And guess what? It has been:

Australian Prime Minister John Howard described the UN as a “paralysed” body and said it was incapable of dealing with international crises.

“The legal advice we had – and I tabled it at the time – was that the action was entirely valid in international law terms,” he said.

The British government – which has argued that UN resolutions provided a legal basis for intervening to topple Saddam Hussein – said the 2003 invasion was “not only lawful but necessary”.
(Source: BBC News)

So… the UN is a useless, ineffectual organisation. What it thinks of the actions of the US, UK and other warmongers is irrelevant and meaningless. But it was right to invade Iraq because Hussein had violated UN resolutions?

Ahh, I get it! When the US and UK can throw their weight around at the UN and get the resolutions passed that they like, then it’s an august, important body whose will must be carried out. But, when it goes against the American Empire, it’s a stupid, pointless institution. Have a look here. That’s a list of all the UN resolutions against Israel that have been ignored by that rogue nation. But hey, Israel is a US ally so let’s forget about them, eh?

It’s all so clear to me now!