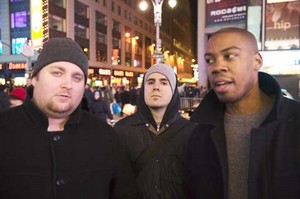 This week’s top tune was courtesy of Hangar 18. It was ‘Rumors (sic) Of War’ which is off ‘Who’s America?’:

Who’s America?, a collaborative compilation born of some of electronic music and hip hop’s finest coming together to raise civic awareness and draw attention to the upcoming Presidential Election, perhaps the most important one in decades. System and Definitive Jux have contributed exclusive new tracks in addition to some well known classics, in the attempt to highlight the powerful platform our culture and community can be when brought into sharp focus and how ownership of the principals that support this nation leads directly to the ownership of power itself. Who’s America? is meant to inform, encourage and challenge a demographic made apathetic by manipulative and self-serving powers that be. Worse, this apathy is rapidly giving way to antipathy amongst those who feel their views are not considered nor their voices heard, and that their government acts not as an extension of the peoples will, but by an agenda all its own.

Again, for anything addressing the current hideous political situation, I have to turn to hip hop. Rock music and all its various sub-niches seems completely impotent and apathetic compared to hip hop. Rock music is a lot of shouting about fuck-all, pointless noise. Sometimes entertaining, true, but scared of the real world.

The best old track was The Specials’ ‘Stereotype,’ a classic pop song with lyrics that still strike home all these years later.