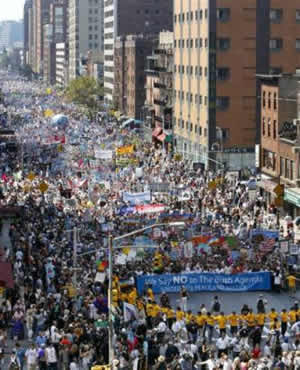 Thousands of opponents of US President George W Bush have taken to the streets of New York to demonstrate against his foreign and domestic policies.

For those of us who don’t like being ruled by war criminals, the above is great news. It shows Americans will only take so much bullshit before getting out on the streets. Remember, this was a nation founded by revolutionaries.

Of course, the protestors faced a barrage of counter-protests from pro-war nutters. I saw one bloke on the telly saying that no-one should pay any attention to the anti-Bush protestors because “they’re all insane.” Nice ad-hominem attack there, backed up by zero factual content, as is usual from the right-wing.

Who’s insane? I’d say it’s the people who support a president that is either stupid or evil. He said there were WMDs, he said there were bioweapons. There weren’t. So… he was either lying about it (which means he’s evil) or he actually believed such erroneous data in which case he’s an incompetent fool. Which is it, Republicans?

Here’s the basic thing: I don’t cheer when Americans die. I don’t cheer when any human being dies. I don’t want any US soldiers to die, even if they have been torturing innocent civilians and carrying out war crimes in a non-aggressor country. If they’re guilty, I want them brought to justice and properly tried.

But the right-wing US mindset is a truly devilish thing to behold. I’ve seen news reports where people are laughing about Iraq getting bombed flat, where they patently don’t think that anyone with a slightly darker skin than them is a human being. These people truly believe that the US is justified in going anywhere it wants, killing whoever it wants and getting away with it. It’s that fascistic personality type that drowns out any criticism by shouting “USA! USA! USA!” Four legs good, two legs bad…

I wouldn’t call myself a pacifist. If my homeland was attacked by foreign invaders, I’d do my best to fight them, in whatever way I could. I would have fought against the fascists in WWII if I’d been alive then. But the invasion of Iraq was totally unprovoked and had nothing to do with the WTC attack. The PNAC cabal seized on the attack to push through its fascist agenda of US military imperialism. Anyone who’s not totally brainwashed by Fox News will see that.

The pictures from New York today have been a beacon to all of us who want the US people to rise up and throw out their idiot president. For me, they show the real moral core of America, a proud, strong, peace-loving people who don’t want evil done in their name. Their basic point is ‘it’s wrong to kill people who haven’t attacked you.’

Only a moron or a Nazi would disagree with that.