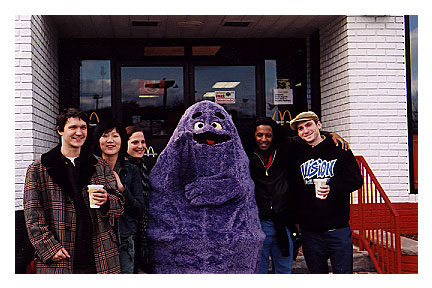 The Good Life. Richard Briers is in the suit

Tonight’s top tune was ‘Lovers Need Lawyers’ by The Good Life. Originally a side project of Cursive bloke Tim Kasher, this band seems to have matured into a wholly different and coherent prospect in their own right. Their new album, ‘Album Of The Year’ is a rip-roaring pop album, full of great pop moments. Although they have their own perspective, they seem to be part of the wave of North American power pop that also includes The Shins, Of Montreal, The New Pornographers and Rogue Wave. This Nouvelle Vague du Pop is my kind of wave!

The best old track tonight isn’t that old. It was ‘Secret By Design’ by Plans And Apologies. People think I’m taking the piss when I play this track (since I know the band) but I play it because it’s a damn good pop song. It was written by a great songwriter and played by a band who naturally, organically just work. There’s no laboured image construction, no deadeyed trend-following, just honest (often ramshackle) music. It’s always bitter-sweet playing this song because I know that it deserves to be heard by millions and hasn’t been. Maybe one day it will?