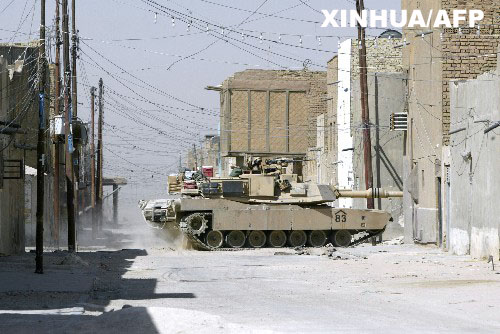 For nearly three weeks, a plucky underdog has been fighting a massively more powerful and better equipped enemy.

But you won’t have heard about it like that. Because that enemy is us.

All that time, USK forces have been laying down a barrage on the Iraqi holy city of Najaf. Their opponents? Ordinary Iraqis who reject both US colonialism and the puppet government installed by Bush’s decree.

In Najaf, residents clustered in doorways as tank shelling and sniper fire resounded for much of the morning through the grid of narrow and otherwise empty streets bordering the south-east boundary of the old city. American Abrams tanks took up positions close to intersections and earlier an AC-130 gunship raked insurgent strongholds with cannon and howitzer fire.
(Source: The Independent)

Their crime is to fight for the right to be involved in the rule of their own country. They follow Shiite leader Muqtada Sadr… hold on – Shiite? Weren’t the Shiite Muslims the ones constantly rebelling against Hussein’s rule? Weren’t they the ones trumpeted by the US as oppressed and marginalised by Hussein?

The Shiite Muslims were meant to be welcoming the US and UK forces with open arms. Instead, they have consistently demanded autonomy for Iraq and an end to foreign rule. So…when these people rose up against Saddam, they were brave freedom fighters, daring to challenge the tyrant’s rule.

But when those very same people rise up against our rule, then we call them “insurgents” and “militants.”

Imagine living in Najaf. If you’re lucky enough to have survived the “liberation” of your country (and your oil) by USK forces, you’re now living under a constant daily barrage from helicopter gunships and tanks. You watch your city being bombed into tiny bits every day, all because the US must secure Iraq in its bid to control the supply of black gold.

The price of a barrel of oil approached $50 for the first time yesterday following further unrest in Iraq. With confusion surrounding the situation in Najaf, the price of US crude oil hit $49.40 a barrel, before easing in late trading to just below $48.

The markets are being driven by events in Iraq, where last night the interim government and renegade Shia militias appeared to be looking for a way out of the siege at the Imam Ali shrine without a further escalation of violence in one of the country’s holiest sites.
(Source: The Irish Times)

So, despite all the Bush and Blair bullshit about the invasion of Iraq being about WMDs, human rights, democracy etc, we can see that the international markets know what the real target was: control of those oil fields.

Otherwise, if the Iraq war wasn’t about oil, why are oil prices being affected by the course of that war now?