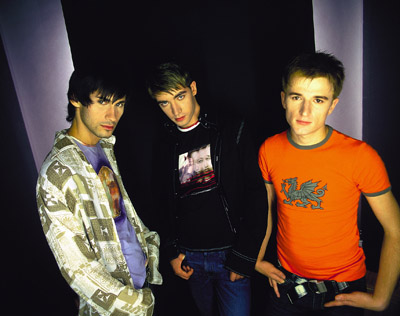 My favourite pop song so far this year has to be ‘Dragostea Din Tei.’ I fell in love with the version by O Zone but apparently it’s also been a hit for Haiducci. So… I’ve been trying to find out who wrote the song and who recorded it first.

First of all, my Romanian isn’t too hot and a lot of the webpages I get are gobbledygook to me.

Secondly, ‘Dragostea’ seems to have set off a cultural pipe bomb. Most of the stuff I’ve found is heated arguments about how shit the song is / O Zone’s sexuality / the song being a portent of the end of Western civilisation. Fair enough, if you don’t like the song, you don’t like it. But what galls me is the criticism masquerading as immutable fact.

All my life I’ve heard the same empty posturing. Pop music has always been derided and devalued for its simplicity and transparency when these are the very qualities which define great pop. In the ’70s, it was hairy prog rockers in German army coats, moaning that pop bands couldn’t play their instruments. In the ’80s it was old rockers moaning on about synthpop. The Musicians Union even tried to ban synthesizers. In the ’90s, sampling was the great beard-strokers bugbear and you couldn’t move for articles wanking on about the “recycling” of music. Never mind that rock has been recycling the Delta Blues for the last 70 odd years.

But no… what’s always been high-status is experimental music, difficult music. Throw some skunks down the stairs, record it and then shout over the top about cloud formations and you’ve made a masterpiece. It doesn’t matter if there’s zero content or connection to any listener, it’s difficult so it must be good.

The apotheosis of this barren pseudo-intellectual posturing is the classic complaint about electronic music: “they just push a button and it’s all done for them.” Even if that were true (and if only it was!), how does that affect the quality of the finished work? Many of the artists revered nowadays didn’t paint their own canvases, they had teams of painters. Does that invalidate their work? Is all that counts in art the amount of technical expertise exerted by the artist in its construction? Was Marcel Duchamp just pissing in the wind?

What counts to me is the idea. I don’t care in what manner that idea is realised, it could be with a sampler or a 200 piece orchestra playing zithers. Technical prowess always comes a very long way behind in terms of importance. That’s why there’s so much music out there which is technically well sung, technically well played and excellently recorded but completely un-catchy and tedious. Those artists don’t have the spark, that great pop sensibility that makes a tune crawl into your head and hang there, going round and round.

When I hear ‘Dragostea,’ I hear a song so richly addictive that I’ve had to start learning Romanian to sing along. Just the silly ‘Mai-ii-hi’ bit is catchier than most bands’ entire recorded output. I’ve no idea why the Linden tree is so important but I’m fascinated that it’s made it into an international hit record.

So give me O Zone any day over Mogwai, give me pop instead of “serious music.” And save me from the legions of dull blokes out there worrying about musicianship and “innovation.”