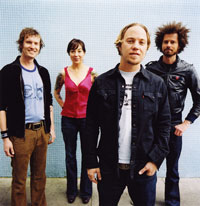 As I played so much new music tonight, I’m a bit stuck for which one to pick for tonight’s top tune. There’s ‘Whipping Boy’ by Shearwater, from the excellent album ‘Winged Life’ (on US import via Misra Records or released next Monday in the UK by Fargo Records). Or then there’s the cracking ‘Us’ by Sweatshop Union, yet another top-notch act on my fave hip hop label, BattleAxe. But the winner of tonight’s top new tune is Rogue Wave and their excellent song, ‘Every Moment.’ Obviously, they’re going to be compared to labelmates The Shins but I think they’re a bit more Beach Boysy and, at times, remind me of Mummer-period XTC. The album, ‘Out Of The Shadow,’ is out on SubPop now and anyone who likes supremely catchy pop music should check it out.

Top old tune was ‘I Wish’ by Stevie Wonder. What can I say about this song apart from it’s one of the most perfect pop songs ever recorded. It’s faultless. From the intro (Stevie playing stacked monophonic ARP2600 pseudoclav) to the horns to the crisp, knob-on drumming (Stevie again, the bastard), there’s not one nit I can pick with this song or the recording of it. I first heard it as a kid, when it came out, and as I’ve grown up with it, I’ve found extra layers of meaning that become more apparent year by year. You know a pop song’s good when you can listen to it for 28 years and not get bored.

Looking back on when I was a little nappy-headed boy: