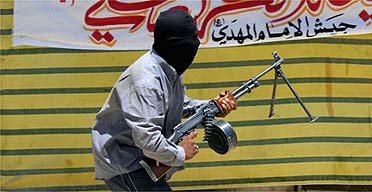 Iraq’s interim Vice-President Ibrahim al-Jafari has criticised the United States for its heavy-handed assault on Najaf to quell the on-going uprising.

In a television interview on Friday, al-Jafari expressed dismay over US claims that up to 300 Mahdi Army fighters had been killed in Najaf and said it was hardly the civilized way to rebuild Iraq.

“Of course when I hear of the deaths of Iraqi civilians, I cannot find any justification for the killings,” al-Jafari said.

“I think that killing Iraqi citizens is not a civilized way of building the new Iraq, which is based on protecting people and promoting dialogue, not bullets.”

It comes to something when a representative of the US-installed puppet government dares to criticise his masters. Of course, most of us with any brains/not in the direct employ of Rupert Murdoch never believed that any real transfer of power had taken place: Iraq is still a country occupied by foreign armies dividing up the spoils of war. And killing 300 people any time they feel like it. Killing uppity natives is an unavoidable chore for any imperial power. See also India, China, Africa…

In a sermon read on his behalf in the Kufa Mosque close to Najaf, Mr Sadr blamed the US for all the violence in Iraq. The interim government has called Washington “our partner,” he said. “I say America is our enemy and the enemy of the people, and we will not accept its partnership.”

All I know is that another 300 Iraqis are dead in this wonderful war of liberation, of friendship, of peace. If the invading forces were wanted and welcomed by the Iraqi people (as was trumpeted before the invasion), where are all the resistance fighters coming from? It’s not from outside the country, that bullshit about “foreign fighters” was disproved a while back. Also, if we’re talking about “foreign fighters,” what the hell are all the US and UK troops?

The Iraq War drags on and on. No WMDs, no threat to the West, no links to Al Quaeda and no Iraqi democracy… nothing our glorious leaders brayed about was true. And every day, more lives are lost as a result of their lies. The foreign occupying armies are fighting Iraqis, they’re fighting to save Iraq from Iraqis.

The following song was written about a different war but it fits this one pretty well:

Words and Music by Tom Paxton

I got a letter from L. B. J.
It said this is your lucky day.
It’s time to put your khaki trousers on.
Though it may seem very queer
We’ve got no jobs to give you here
So we are sending you to Viet Nam

I jumped off the old troop ship,
And sank in mud up to my hips.
I cussed until the captain called me down.
Never mind how hard it’s raining,
Think of all the ground we’re gaining,
Just don’t take one step outside of town.

Every night the local gentry,
Sneak out past the sleeping sentry.
They go to join the old VC.
In their nightly little dramas,
They put on their black pajamas,
And come lobbing mortar shells at me.

We go round in helicopters,
Like a bunch of big grasshoppers,
Searching for the Viet Cong in vain.
They left a note that they had gone.
They had to get down to Saigon,
Their government positions to maintain.

Well here I sit in this rice paddy,
Wondering about Big Daddy,
And I know that Lyndon loves me so.
Yet how sadly I remember,
Way back yonder in November,
When he said I’d never have to go.