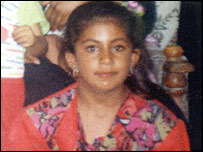 Another child’s life lost to the senseless crusade of Bush and Blair.

Still, £390 – that’s not bad, is it? I’m sure any British parent would be very happy to accept that as recompense if a foreign soldier murdered one of their children.

Hanan’s parents will probably thank the UK for killing their daughter in the long run, just as Geoff Hoon predicted last year when asked what he thought Iraqi parents would feel about their murdered children.

Now Iraq is a land of bucolic peace and easy democracy, we must forget about children murdered by our occupying troops. Their lives don’t matter. Nor do the lives of the 13,000+ other civilians killed in the attack on Iraq. After all, they’re all free from the evil tyranny of Saddam now, aren’t they? Would you rather they were alive and Saddam was still in power, would you?

They’ve died joyfully under our barrage of carefully targeted cluster bombs and trigger-happy psychopaths. This is a great day for Western civilisation and democracy.

Just look at the happy smiles on the faces of Hanan’s parents!