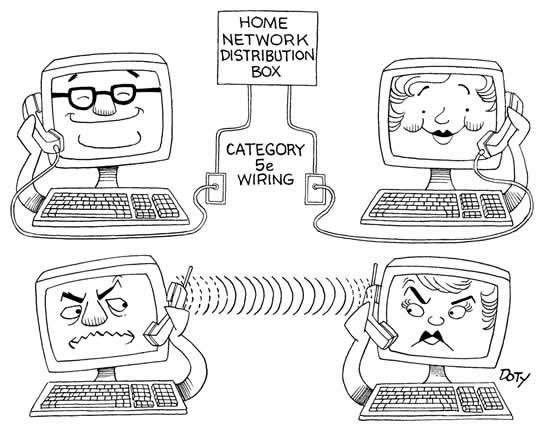 Wi-fi, schmi-fi! I spend half my working hours shuttling enormous audio files backwards and forwards between my Macs, a piddly wireless connection is bugger-all use to me. I might as well post them.

No…what I need is the manly bandwidth of wired ethernet. Just watch those suckers fly!

So, one of the things I wanted in my new studio was for the G5 to be hooked up to my router by metal not radio. I got the builder to run the cable, thinking that was the tricky bit and that adding the sockets would be a doddle. Umm…

First of all… do some reading up. At least have a google around and read the many excellent FAQs about cabling up ethernet.

Then you might order the right part from the supplier rather than a bare ethernet module when you were expecting a wall plate. This is what the assembled jobby looks like, after you buy the missing bits: 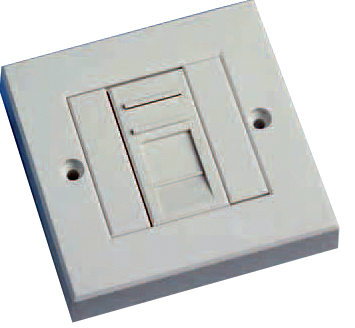 It might help if you buy the right tool for the job too. If you’re terminating Cat 5 cable into a wall socket, you need an impact tool, like this handsome fellow:

Don’t spend £20 on a RJ45 plug crimper like I did. Wrong! Still, it’s handy for hammering nails into my head.

Now, I’m not new to wiring and electronics, I spent most of my childhood soldering shit together. I grew up on one pot violins and breadboards. But the pissing fiddly wires on Cat 5 cable are a new triumph in electronic irritation: 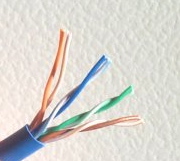 Strip the casing, prepare four of the eight wires and then… snick! I’ve snipped one of the bloody ends off instead of stripping it. AARGH!

Right, snip the whole lot off and then start again. At least the impact tool works brilliantly when I’ve actually managed to get the twatting nanowires in place.

So, once assembled, I tested the sockets and… nowt!

The little light on my router stayed off which means that there’s something wrong with the physical layer (translation: you’ve fucked-up the wiring, you div).

Hmmm. I suppose this would be much easier if I had a continuity tester. Or even a fancy ethernet tester. But I haven’t and I’m not going to fork out for a one-time install.

So… I rip out the wires from both sockets, cut back and start again. Bear in mind that if this time doesn’t work, I’m now running out of wire at one of the wall boxes. If I bugger it up this time, I have to look like a total knob and ask the builder to run another length of cable to replace the one I’ve butchered.

Strip outer sleeve, separate twisted pairs, strip their sleeves (being VERY CAREFUL not to snip them) and then punch them into the socket. I’m using 568B wiring as opposed to 568A.

Yes. Of course. Why the hell have TWO different wiring schemes for the same socket, you BASTARDS!

Then, trembling, I plugged my PowerBook into the studio socket, plugged the router into the sitting-room socket and IT WORKED!

HAH! Eat that, Enrico Fermi! I AM A WIRING GENIUS!

Okay, it isn’t that impressive really. But I’ve now got two lovely, working ethernet sockets and am fully wireless-less. 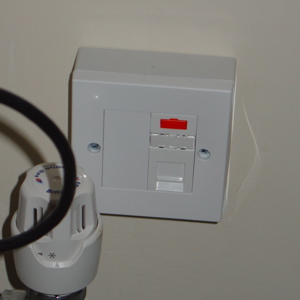 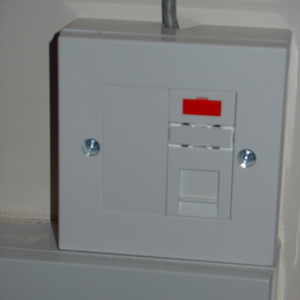 My lovely sockets. Now I know the pride God felt when he surveyed his creation.

Even fuller than last week! Where the hell are all these new people coming from? At this rate, when Uni gets going again there’s gonna be 500 peeps on the dancefloor…

Top tune tonight was ‘Thorn.’ An indie classic and worth cricking my neck for. Damn my old cervical vertebrae!