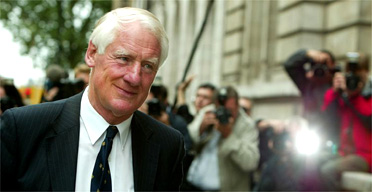 How evil are you? Well?

Maybe you’ve been unfaithful to someone you’ve been seeing. Used them, mislead them. Lied to them. That’s getting nastier.

You’re a burglar. Or a rapist. Or you’ve killed someone.

That means you’ve hugely damaged or ended someone’s life. You’ve probably also sent ripples of despair and hurt out to their family and friends.

These crimes are rightly villified in any civilised culture, they’ve been reviled through the ages.

But just compare them to what Tony Blair has done. He’s taken part in the ravaging of an entire country, already hideously scarred by the US/UK protégé Saddam Hussein. Blair’s made orphans out of tens of thousands, blighted the lives of hundreds of thousands of relatives and friends. Iraq is now a country occupied by the US military, its people have no democracy and are subject to terror and torture from all sides. They’ve simply had a change of dictatorship. This is the evil that Butcher Blair has done.

The Butler Report had this to say today:

The inquiry said that when the government began considering military action against Iraq in March 2002, the intelligence was “insufficiently robust” to justify claims that Iraq was in breach of United Nations resolutions requiring it to disarm.

And it said that since the conflict, key claims based on reports from agents in Iraq, including claims that the Iraqis had recently produced biological agents, had had to be withdrawn because they were unreliable.

It said that Tony Blair’s statement in the Commons may have “reinforced the impression” that there was “fuller and firmer” intelligence behind the assessments in the dossier than was actually the case.

Decoding the governmental bullshit, Butler is basically saying that there was no case for war. There were no solid grounds for the invasion of Iraq.

But the report also exonerates the head of MI6. And Tony Blair. It says that there was “no deliberate attempt on the part of the Government to mislead.”

That’s as clear as mud then. A country illegally invaded, over 10,000 civilians murdered by the US and UK invaders, scores of innocents imprisoned and tortured by the same “liberators” and who’s to blame?

Thank god for Britain and our wonderful sense of honour and justice. It’s the best in the world!

So, the next time you have a little pang of conscience, take a tip from our Tony and keep smiling through! You’d have to go a long way to equal his cheery, arrogant evil.