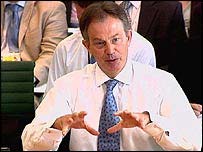 Tony Blair has said Iraq’s weapons of mass destruction “may never be found”.
Mr Blair said he had “to accept we haven’t found them and we may never find them” – but that did not mean Saddam Hussein had not been a threat.
He said the former Iraqi leader had been in breach of UN resolutions and his weapons may have been “removed, hidden or destroyed”.
Mr Blair also said US security concerns had to be tackled before British detainees at Guantanamo Bay are freed.
(Source: BBC News)

A lot of my rants focus on the USA and its rogue government. This combination is currently the most violent and vicious regime on this planet. Not the people of the US, but their court-appointed rulers. Bush is nothing more than a startlingly unintelligent and ignorant puppet of the PNAC cabal. Therefore, despite his ordering the illegal invasion of Iraq, I can’t hold much personal animosity towards him. The man can barely string a coherent sentence together: it’s pretty obvious he’s not making any of the big decisions.

But Tony Blair is a different case

Unlike Bush, Blair had no hereditary privilege, no neptotistic leg-up on the political ladder. He clawed his way to the top of the Labour party and then re-made it in the form he desired, as New Labour. His vision was to ditch socialism and replace it with the vague liberalism of the US Democratic party. He succeeded. And now the only choice we have in Britain is between three parties who only differ in the way they manage capitalism. No party wants to change or replace it. As in satellite tv or washing powder, we’re presented with minutely varying flavours of the same thing. So much for choice.

It’s now becoming obvious how his success has warped him, made him intransigent, arrogant and ruthless. He tried to impose his choice of candidates in Wales, Scotland and then the London Mayoral elections. He failed miserably each time, the public choosing to humiliate him at the polls. The same thing happened recently in the local elections, with every political pundit claiming it was the British public’s judgement on his warmongering.

And yet he still blusters on, braying that he was right to follow the US lead, to send British troops to invade a non-aggressor country. What attack had Iraq made on Britain or the US?

What factual evidence did Blair have of the existence of Iraqi WMDs?

For him to claim now that it was all a mistake of interpretation is the biggest pile of bullshit he’s ever laid. We remember how his cronies doctored intelligence reports, we remember how they manufactured ‘evidence’ when none existed, we remember his preposterous claim that Britain was ’45 minutes’ from a serious attack.

It’s clear that Blair was determined to have his little war whatever the evidence, or lack of it. He wanted to prove what a loyal little lapdog he is to the USA. And the lives of tens of thousands of Iraqi civilians were sacrificed on the altar of his political amibtion.

All those people. Murdered. All butchered with the help of Blair.

I’ve said many, many times that anti-Americanism is just racism. Sadly, it’s prevalent in UK lefty circles because it’s an easy option: you don’t need to read or educate yourself, you just start shouting catchy slogans about Bush and the USA. Whilst I’m not denying the pure evil of William Kristol and the other PNAC Nazis, we have to look closer to home. Why complain about the US when we have a monster in No.10?

Blair is one of the major reasons those Iraqis are dead. Without Blair, the US government would have lost one of their most important international supporters. Perhaps if we’d had a PM more concerned with human lives than his career, the US would have been reined in.

If there were any true justice in this world, Butcher Blair wouldn’t be facing a committee of parliamentary pals, grinning and joking while more people die in Fallujah. He’d be in the dock next to Saddam Hussein, tried as the war criminal he is.