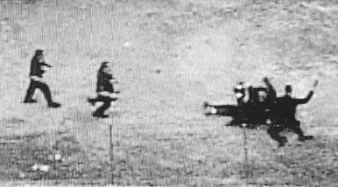 LOS ANGELES — Officials vowed yesterday that any officers who broke the law during a videotaped beating of a black man will lose their jobs and be brought to justice. …A TV news camera caught the violent arrest on tape this week, and the beating quickly drew comparisons to the Rodney King case. …A Hispanic officer was seen hitting Stanley Miller at least 10 times with a flashlight after it appeared the man had surrendered following a car chase.(Source: Calgary Sun)

What other title could I have for this rant when it’s about the Los Angeles Police Department beating up a black man who’s from Compton?

And for every police beating caught on videotape, how many go unseen? Ten? A hundred? Perhaps the best way to stop the illegal activity of the LAPD would be to assign people to videotape every officer? Then perhaps they might actually start solving crimes rather than committing them.

“The thing that hasn’t changed is the accountability level as far as police violence goes, and particularly the department’s continued failure to weed out rogue cops,” said former police commissioner Melanie Lomax.

Rogue cops… yeah, right! Just a few ‘bad apples,’ we’ve all heard that lie before. The truth is that the LAPD is as institutionally racist as the British police force. If you’re murdered in Britain and your skin happens to be the wrong colour, the police won’t break a sweat:

And in Los Angeles? Fifteen years after this song was released, twelve years after the L.A. riots, it doesn’t look like a damn thing’s changed.

Who watches the watchmen?