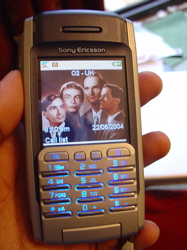 Above is a pic of me holding my lovely new gadget, a Sony Ericsson P900 PDA / phone. This isn’t the first organiser phone I’ve had: I had a Sagem WA-3050 four years ago. Although a very cool gadget, in the end it was a wee bit too wide for daily ergonomic comfort. And I’ve never liked dialling numbers on touchscreens.

No such probs with the P900. As you can see, it has a proper keypad, it fits snugly into my hand and the display is still enormous. Can you see the pic of the best band in the world EVER I’ve set as my wallpaper? It’s crystal sharp on the phone, the moire pattern is just from the interference between the pixels of the phone and the sensors on my little DSC-V1’s  CCD.

I’ve had my phone about a month now and it’s ace. The Symbian OS is nippy and processes searches and menu functions very slickly. I’ve only got a couple of slight niggles. The first is that when the phone is auto-keylocked, sometimes it takes a few seconds to unlock, like it’s gone into a standby mode. The second is that all the supplied software is for PCs. I’ve managed to get the P900 up and synched with my Powerbook’s iSync but it’s a flaky process, not anywhere as easy-peasy as the T610. I hope a future update from Apple sorts these issues out. Having said that, general bluetoothing connectivity is excellent, I’m able to drop mp3s, jpegs and anything else I feel like onto the phone. I even got  Doom  running on it. Looked very, very cool but it was a tad hard to control. Plus, I was always shit at Doom, give me Rise Of The Triads any day.

I’ve popped in a 128meg memory stick, bunged loads of pics, mp3s and other triviana on there, it’s a little activity centre for when I’m bored on train journeys. I love the little flip-down keypad, it’s so doody. 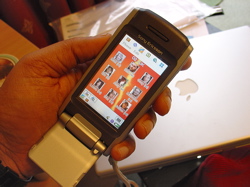 Flipping it down puts the phone into speakerphone mode so it’s pleasingly close to using a communicator from ST: TOS. Ahhh, what self-respecting geek doesn’t long to flip open a communicator and instantly be in touch with his loyal crew and perhaps some fit green-skinned lass?

The built-in cam isn’t any match for a dedicated camera, of course, but compared to most phonecams it’s a Hassleblad. The following pic is a collage of P900 pics, none of them have been Photoshopped apart from resizing (most of them were taken at 640×480): 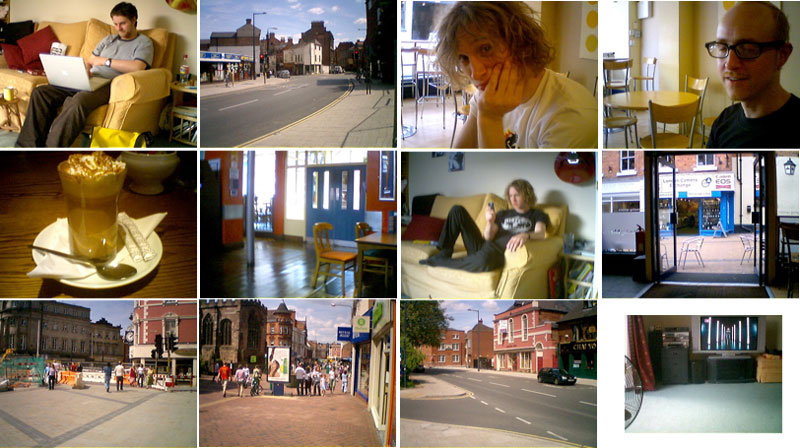 Really, I’ve only scratched the surface when it comes to the power of this supergadget. Games, legible web browsing, music, boring officey shite, it does it all!

I’ve just switched from using Movable Type to WordPress on Bzangy Groink. The major reason is that I saw it running on my mate MWNP’s site and was jealous of its beauty.

Installation was a piece of piss, even for an SQL / PHP / Unix noob like me. It just *worked*. I find it depressing that a piece of free software can be so simple and transparent and yet stuff that’s cost me seven or eight hundred quid is as user friendly as ebola. So full marks to all the WordPress geeks there!

If anyone is worried about migrating their Movable Type site to WordPress – don’t be. It was even easier than the install. Backed up all my MT entries to a text file, stuck it in the right folder and then one click and it was all done. Plus, I can now wave goodbye to all those interminable rebuilds. I’m not saying MT is a piece of crap – it’s just that I personally find WP far less clunky and far easier to work with.

I downloaded some CSSes from Alex King’s wonderful site and ended up combining elements of Buddha and Scandinavia with a lot of head-scratching and my colour blindness. So don’t blame them if your eyes hurt reading this 🙂

I’d readily recommend WordPress to anyone who wants a powerful content management system for their website but is afraid of too much geekery. Take it from me: I barely know my way round CSS let alone the rarefied realms of PHP or XHTML. If *I* can get WordPress up and running all on my lonesome, so can you.