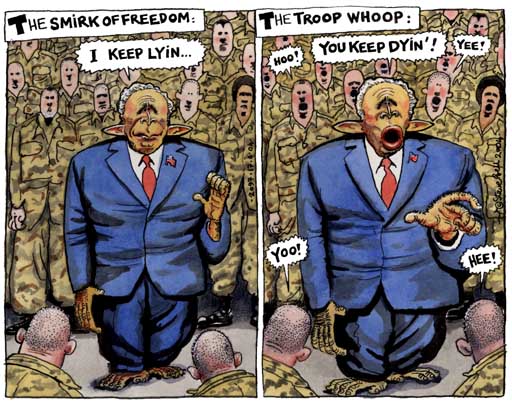 The US national commission examining the 11 September 2001 attacks has found no “credible evidence” that Iraq helped al-Qaeda militants carry them out.

The statement appears in a report on al-Qaeda published before the final public session of the commission.

It contradicts remarks by the US vice-president about Saddam Hussein’s “long-established ties” with al-Qaeda.”(Source: BBC News)

So what was the American war against Iraq all about then?

Only a moron or Tony Blair would deny the evidence of the last year: no WMDs found, huge uprisings by the Iraqi population against their supposed liberators and now an official judgement that the main justification used by the warhawks for the attack on Iraq was false.

Still, no harm done, eh? I’m sure the tens of thousands of civilian Iraqis were glad to die underneath the barrage of US & UK bombs, knowing their deaths would guarantee umm… well, what?

Not a reduction in terrorism. That’s in fact increased. The US government was crowing about reducing terrorism but it was yet another lie:

When the annual report was issued April 29, senior administration officials used it as evidence the war was being won under Bush.

“We weren’t saying terrorism has gone away. The report clearly says terrorism is a main problem facing the world today. We’ve got to continue going after terrorists,” Powell said.

“But based on the data we had within the report, there was a suggestion that the number of incidents had dropped and it was the lowest since 1969,” he added. “That turns out not to have been correct. We were wrong. We will correct it.”(Source: The Guardian)

An unfortunate error that wasn’t noticed until a leading Democrat, Rep. Henry Waxman of California, contested the Bush PR. Funny that, eh?

Still, at least all those Iraqis died to give their country a true, independent democracy, didn’t they? Not quite:

In the case of Iraq, the question also arises of whether the occupation will actually end on June 30. In crucial matters, such as oversight of the armed forces, Iraq will not have true sovereignty. (Source: International Herald Tribune)

Ahh…so when the US says “full sovereignty” they actually mean the US government still runs the country. So much for the American notion of democracy. Sounds a lot like the old Soviet idea of “sovereign nation” for the countries it invaded and annexed.

The illegal invasion of Iraq was justified by the warhawks on these three points:

1. Massive stockpiles of WMDs
2. Iraq as a key supporter of the Al Quaeda terrorist network
3. Removing the dictator Hussein would bring democracy to Iraq. There would be no resistance to US + UK forces from non-Hussein forces since they would be welcome liberators.

All three of the above points are completely and utterly false. They continue to be peddled to us by Butcher Blair and his New Labour warhawks.

This continued barrage of utter bullshit shows just how stupid they think the British public is.

Only time will tell if their low opinion of our intelligence is justified.