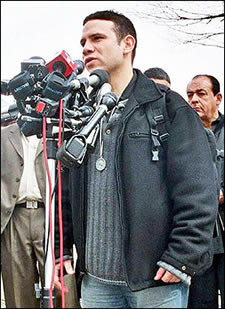 “FORT STEWART, Ga. – A U.S. soldier who said he saw prisoners being abused in Iraq was convicted of desertion on Friday for failing to return to his unit after taking leave to the United States last year.

Staff Sgt. Camilo Mejia, … a nine-year U.S. Army veteran, was deployed to Iraq early last year and took a two-week furlough to the United States in October. He was gone for five months before surrendering to Army officials in March. He has filed an application for conscientious objector status.” (Source: Reuters)

Yes, now there can be romantic films made about people protesting against Vietnam and dodging the draft. But at the time, these people were made pariahs by mainstream society.

So, even though it’ll mean fuck-all to him, I’d like to take this chance to salute Staff Sgt. Camilo Mejia, a true war hero.

“I sit here a free man because I did the right thing,” Mejia said. “I have no regrets. All of us in uniform are on trial. The world is watching.” (Source: Reuters)

To take such a moral stand when all around your fellow soldiers are torturing, raping and murdering innocent Iraqis requires tremendous courage. I can’t even imagine the pressures involved in a long-serving soldier deserting, abandoning the whole framework of their life.

If only there were equivalent people of conscience at the head of the US government. Perhaps the lives of their own troops and Iraqi civilians wouldn’t be regarded so cheaply?