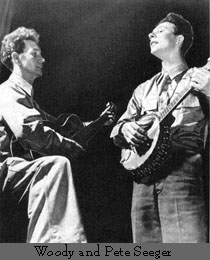 I’ve loved Pete Seeger for around 15 years now. As with Michael Nesmith, I got into his work by hearing his songs performed by others. The first one I heard was The Byrds’ version of ‘Turn! Turn! Turn!’ I loved the way the song flowed and the sense of peace and acceptance it provoked.

I finally got a live version done by Seeger himself and it was even more entrancing. His great voice, like a tall oak, ringing out the words and making them speak volumes more than the Biblical lyrics alone. And at the end of the recording, you can hear the audience joining in, it’s quite spooky and very moving.

Today, I found a new article about Seeger on the Common Dreams website. Here’s a choice quote:

“But when Red hunters of the McCarthy era caught wind of the political views and associations of some members of the Weavers, the group was blacklisted — banned from the airwaves and blocked from performing in most mainstream venues.

In 1955 Seeger was hauled before the House Un-American Activities Committee, where he refused to say whether he had performed for Communist-sponsored events.

“I have sung in hobo jungles, and I have sung for the Rockefellers, and I am proud that I have never refused to sing for anybody,” he told the committee.

His defiance earned him a one-year prison sentence for contempt of Congress — later overturned on appeal — and a hero’s place in the hearts of a generation of progressives and peace activists. Attending a Seeger concert became a political event in itself.”(Source: Common Dreams)

This is a man who’s spent his entire life promoting non-violent resistance and borne the brunt of the darkest period in American politcal history.

But he didn’t give up. And, what’s more important, he never stopped singing, organising, teaching – all those things that truly great artists have to do. And he was sXe way before Ian MacKaye was even a glimmer in his Daddy’s eye:

“Seeger dropped out of the Weavers after a few years. “I just don’t like singing in nightclubs,” he said. “I don’t drink, I don’t smoke and I don’t drink coffee. But I really wanted to help the peace movement and the union movement and the civil rights movement.”(Source: Common Dreams)

Can you imagine living Pete Seeger’s life? Can you imagine being witchhunted by your own government, held up as a suspect Commie in the most anti-Commie of times? But not letting that stop you, writing / popularising now standard folk classics like ‘If I Had A Hammer,’ ‘Goodnight Irene,’ ‘Where Have All The Flowers Gone?’

Where are the modern-day musicians who can equal Seeger’s drive, determination and commitment? What we have now is a million singers pretending to be rebels but actually saying and doing nothing. Their “rebellion”: tiny variations in teenage dress codes. Whoop de dooh. The scope of their work never strays outside their own navels.

Pete Seeger sang about ordinary life, yes, but he also sang about the world, about the environment, about the struggle for basic human rights in a segregated, racist America. He wasn’t afraid to wear his heart on his sleeve.

If this sounds like an obituary, it’s not meant to be. The old bugger’s still alive, still campaigning and still speaking out. I’ll leave the last word to him.

“I’m still trying to do some little things,” he said. “If there’s a human race here in a hundred years, it won’t be any big thing that will save it — a big slogan, a big movement, a big organization of any kind. It’ll be saved by literally hundreds of millions of little things going on.

“There are more good little things being done in America now than at any time in history. Big things can be destroyed. The powers that be are so powerful they can destroy any single thing they want. But what are they going to do about millions of things?””(Source: Common Dreams)