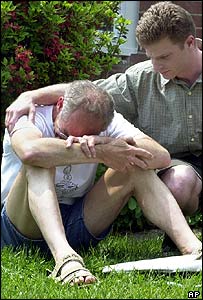 “A US hostage in Iraq was pictured being beheaded by Islamic militants in a video released yesterday that said that the grisly act was revenge for the abuse of Iraqi detainees by US troops.

Five men wearing headscarves and black masks were pictured standing behind a bound man in a Guant?namo Bay-style orange jumpsuit, who identified himself briefly before one of his captors put a large knife to his neck. A scream was heard, followed by shouts of “Allahu Akbar!” – “God is greatest” – as the head was held out to the camera.”(Source: The Guardian)

This murder is a horrible, filthy act, carried out by men who pin their God’s name to this barbarity. More proof that there is no god – otherwise, why would she/he let their name be taken in vain by such villains?

Meanwhile, the wearied Bush administration has seized upon Berg’s death and tried to pervert it into political capital. Anything to try and portray the US military’s torture and rape of Iraqi prisoners in a better light:

“This shows the true nature of the enemies of freedom,” the White House spokesman, Scott McClellan, told reporters. “They have no regard for the lives of innocent men, women and children.” The Foreign Office called the episode “utterly repugnant and indefensible”.(Source: The Guardian)

Yes, that’s certainly true, Al-Quaeda have no regard for human life. But, as can be seen by the illegal invasion of Iraq, neither does the US government.

In fact, both are exactly the same. Both kill, maim, torture to achieve their political ends, all the while shouting praise to their god, a god of peace, love and beauty. The USA considers the tens of thousands of innocent Iraqis killed by its invasion unfortunate and unavoidable casualties of war. Al-Quaeda seems more pleased at the mayhem caused in the WTC atrocity and Berg’s murder but the difference is petty. Both murder while claiming to hold the moral high-ground.

As for McClellan’s crocodile tears about the abuse of women:

“For Huda Shaker, the humiliation began at a checkpoint on the outskirts of Baghdad. The American soldiers demanded to search her handbag. When she refused one of the soldiers pointed his gun towards her chest.

“He pointed the laser sight directly in the middle of my chest,” said Professor Shaker, a political scientist at Baghdad University. “Then he pointed to his penis. He told me, ‘Come here, bitch, I’m going to fuck you.'”

The incident is one of a number in which US soldiers are alleged to have abused, intimidated or sexually humiliated Iraqi women.”(Source: The Guardian)

I’m sure Iraqi women now feel much safer in the caring hands of the US military. They finally now have civilised, Western values to protect them.

All that matters today is that Nicholas Berg’s parents have lost their son to a great evil. In that grief, they are united with every other relative who has lost a loved one to war, to the process carried out by madmen waving their god’s flag and proclaiming only their truth to be true. Whether the murderers are Al-Quaeda or the US / UK military, the loss is the same.

We need to burn all our flags. Every country, every religion, every political movement. Every single one of them.