“The reaction of British newspapers today to the story [of tortured Iraqi prisoners] was mixed. They were played down by Rupert Murdoch’s papers, the Sun and the Times, and were relegated to inside pages by the Telegraph and the Express, both of which supported the war and Britain’s allegiance to George Bush.

The picture of a hooded Iraqi prisoner standing on a box with electric wires attached to his fingers, who had allegedly been threatened with electrocution if he moved, were used on the front pages of the Daily Mirror, Daily Mail, the Guardian and the Times.

However, most of the pro-war nationals relegated the images to the inside pages. The Sun carried a single picture illustrating a down page story on page six, while the Express ran two pictures on page 10 and the Telegraph used two images in its World News section on page 14.”(Source: The Guardian)

There you have it: your super soaraway Sun doesn’t give a shit if human beings are tortured. Of course, if those pics had been of “our brave lads” you can guess the kind of howling editorial and front page splash that would have made. Never forget this arsewipe of a newspaper published the infamous ‘Gotcha!’ headline. How this poorly written adult fantasy comic dares to call itself a newspaper is beyond me.

These newspapers have marginalised the biggest current news story in the world. The horrific torture of civilians being held without trial means nothing to them. This makes their political allegiances painfully clear. 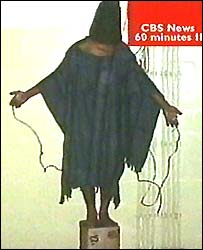 Yesterday I marched in London with, compared to the big antiwar demos, little more than a handful of people. We marched to the US Embassy, protesting against the US’ illegal occupation of Iraq and its war crimes against civilians. As we marched through London, I could see some passers by shaking their heads. They were obviously thinking, ‘lefty nutters – the US is liberating Iraq, they got rid of Saddam. He’s evil, the US is good!’

Today, even the TV media is frothing at the mouth at the “revelation” that US soldiers have been torturing Iraqi prisoners:

“The graphic images include one of a hooded and naked prisoner standing on a box with wires attached to his genitals. CBS said the prisoner was told that if he fell off the box, he would be electrocuted.

Another shows naked prisoners being forced to simulate sex acts. In another, a female soldier, with a cigarette in her mouth, simulates holding a gun and pointing at a naked Iraqi’s genitals.”(Source: BBC News)

The US military has reacted immediately, suspending the commanding officer, Brigadier General Janice Karpinski, and claiming that these soldiers were ‘a few bad apples.’

Yeah, cos the rest of the apples are good, aren’t they? Shooting dead unarmed old women holding white flags, laying siege to Fallujah and murdering an estimated 700 civilians, those are the actions of an honourable military force, aren’t they?

Make no mistake, the torture pictures that have slipped through the net onto US and UK TV are just the tip of the iceberg in terms of US abuse of human rights in Iraq. The ultimate abuse of human rights is the wholesale murder that US stormtroopers have been carrying out. Their attack and invasion of Iraq is a war crime, under the guidelines laid down by the Nuremburg trials. Is it really that surprising that torture of prisoners would also be carried out by these Nazi-like forces?

What you haven’t seen on telly is the pictures of hundreds of Iraqi dead in Fallujah, the shattered bodies of women and children liberated by the honourable, benevolent US military. Why? Because these pictures are deemed ‘too shocking’ by our censors. We always see pictures of the victims of our enemies’ terrorist attacks (as we did in the Madrid bombing atrocity) but we never see the corpses created by the USK military. Therefore, for most of us, they don’t exist. Those pictures are out there but you have to search to find them, they aren’t in the mass media. We’re “protected” from seeing them. This makes us the “good guys” in every war and conflict because our media kowtows to our governments and deliberately distorts its coverage.

Even the coverage of this abominable torture conforms to this framing: every TV report I’ve seen so far has had clips of Deputy head of coalition forces in Iraq, Brig Gen Mark Kimmitt, mouthing bullshit platitudes about being “deeply disappointed” and claiming the prisoner torture was an isolated horror.

Really? That’s not what one of the accused claims:

“One of the suspended soldiers, Staff Sergeant Chip Frederick, said the way the army ran the prison had led to the abuse.

“We had no support, no training whatsoever. And I kept asking my chain of command for certain things… like rules and regulations,” he told CBS. “It just wasn’t happening.”

He said he did not see a copy of the Geneva Convention rules for handling prisoners of war until after he was charged.”(Source: BBC News)

It appears that the US military has zero interest in educating its soldiers about something as rudimentary as the Geneva Convention. Is this truly the way an “honourable” military (what an oxymoron that phrase is) would act?

The US military: Nazis and torturers.

Remember that whenever you hear anyone spouting bullshit about our noble “liberation” of Iraq.

What a weird day…

Me and Keyvan got to the meeting place and there were around eight police vans parked along Malet Street and a handful of protestors. Overkill or what? This wasn’t a national demo, just a small one organised by Student CND, FOSIS and Stop The War.

Once we’d all assembled, I’d say there were around 200 of us. Definitely not enough to warrant the huge police prescence (there were at least 5 police motorbikes, for fuck’s sake!).

We got to the Embassy (well, pretty near it) and after the rally got in a bit of shouting. It was quite cold and wet but there was still a good spirit in the crowd. Four and a bit hours on the train there and back, do I think it was worth going?