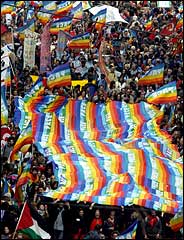 I’m not stupid. I wasn’t expecting a half-hour feature on the BBC about the global antiwar protest yesterday, even though it was the most important event of this year. I wasn’t even expecting them to question the Met Police’s traditionally mendacious protestor count.

But the level of media distortion I saw last night was staggering.

Let’s start with London. All day, as we were assembling and marching, there were news helicopters circling overhead. And yet… there were no shots of either the route or Trafalgar Square until well past 4pm. By which time a lot of us had gone home because, frankly, we were knackered as we’d been standing/marching since 11.30am.

If there had been one shot of Park Lane at around 2pm, you could easily have seen that the 25,000 claimed by the cops was total rubbish. There were at least 100,000 people demonstrating in London yesterday.

Here’s another puzzle: I’ve seen four or five different reports on the net now about the Rome protests, all of them saying at least one million Italians gathered.

Where were the TV pictures?

The only shots from Italy on the main TV news bulletins were of a tiny handful of protestors confronting the riot police. Thus, for an unquestioning audience, the Rome protest of a million never happened.

One reporter even had the gall to say ‘there were thousands protesting around the world today.’ Thousands? Hold on, even by the cops’ lying estimate, there were 25,000 in London alone. So there were tens of thousands in Britain alone.

How about saying ‘hundreds of thousands protesting around the world?’ Or how about being truthful and saying ‘millions?’

This is the way our media frames the discussion: by only portraying certain, palatable facts. It has to admit there were global protests but it does its best to pooh-pooh them by saying they were nothing like the February 15th protest. Even though on February 16th, they were denigrating that very same protest!

Honestly, I don’t know whether to laugh or cry, the situation is so Orwellian.

Or how about the framing of the protests in Spain after the Madrid bombing? On British TV, they were reported solely as being ‘anti-terrorism protests.’ But now, post-election and post the Spanish demos yesterday, we know that a lot of people were also protesting against Aznar. And yet our fearless media manged to miss that at the time. Millions of Spaniards protesting against their leader and his collusion with Bush and Blair.

Of course, we all saw pictures of the hideous Madrid bombing. They were splashed over every tabloid as well. Justifiably so: the bombing was a totally evil act carried out by savages.

But when our bombs reduce an Iraqi village to bloody mush, we don’t get to see that. The pictures are deemed too horrific, are kept out of our papers and off our TV news.

Therefore, those thousands of deaths never happened. And people think the Iraq war was a largely bloodless, “surgically precise” invasion. In the US, Colin Powell doesn’t even bother to count Iraqi civilian casualties, their lives are so cheap to him.

One of the prime reasons there were “only” 100,000 protestors in London yesterday rather than the million of Rome was the magnificent job our mass media has done in serving its masters’ ideology. By their consistent biased framing, censorship and omission, they have helped to justify and then erase the murder of thousands of Iraqis.

What does it say about the media when a pop singer’s breast being exposed is more newsworthy than the death and evil being done in our name in Iraq?