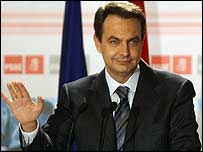 “In the popular view, without Spain’s involvement in Iraq – 1,300 soldiers committed; the fourth biggest national contingent – the 200 who died in the bombings would almost certainly be alive, the 1,500 injured would still be in one piece. The decision to join Blair and Bush’s military adventure in Iraq, in the teeth of the opposition of some 90 per cent of Spaniards, had backfired on the Popular Party.(Source: Fox News)

“Voters turned out in force for Sunday’s elections. Many of them expressed anger at retiring Prime Minister Jose Maria Aznar when he cast his ballot, jostling and booing him while some shouted “Aznar: your war, our dead.”(Source: Common Dreams)

This is a slap in the face for Blair, Bush and the other butchers of Iraq.

The people of Spain, who were overwhemingly against the invasion of Iraq, have now put that anger into the ballot box. Perhaps they were spurred on by Aznar’s blanket spin, denying any possibility of the bomb massacre being linked to Al Quaeda.

People aren’t stupid. We know when we’re being lied to, by Bush, Blair, Aznar and any other collaborator in the phony WMD furore that lead to the Iraq horror.

I wrote last year that this terrible injustice to the Iraqi people would only stoke support for terrorism and make Britain a prime target.

After all, what is terrorism? It’s how people without organised, state-funded armies fight against superior military opponents. I’m making no value jugement here, just trying to establish an objective definition. By that definition, the IRA, ETA and Al Quaeda are all terrorist groups. But so were the ANC, the French Resistance and the soldiers of the American Revolution. The Iraq war has undoubtedly politicised and alienated layers of youth who will now gravitate into terrorist groups. And we are their targets.

But not according to Jack Straw:

“All I can say is that no one should get the idea that somehow if you were a country which was opposed to the military action in Iraq, you are less of a target for al-Qaida and these terrible Islamic fanatics. Not at all.” (Source: The Guardian)

Really? Does that make any sense, militarily? So, if Jack Straw was the head of, say, the IRA, he wouldn’t just bomb British targets, he’d bomb any country at random? He’d waste precious resources destroying targets that weren’t his immediate, most dangerous enemy?

By our part in the illegal invasion and murder in Iraq, we’ve not only put ourselves in the firing line, we’ve created tens of thousands more enemies. If we’ve killed around 10,000 Iraqis (the lowest estimate currently), how many relatives did those people have? Out of those relatives, how many will now see the UK and US as friends? The answer to that can be seen now in Iraq where every day brings fresh attacks against the occupying Western forces. So much for being welcome liberators. And I’m not alone in my argument:

“It is clear that using force is not the answer to resolving the conflict with terrorists,” Prodi said. “Terrorism is infinitely more powerful than a year ago,” and all of Europe now feels threatened, he told the paper.”(Source: Common Dreams)

I have very little doubt that we’ll see a major attack on the UK soon. British civilians will die as a result of our attack on Iraq, as a result of Blair’s bloodlust. I also know that every warhawk in the government will then scream that this justifies, retroactively, the attack on Iraq. Amazing logic: punch someone who hasn’t attacked you and then when he punches you back, claim that’s proof of their evil. And before some right-wing nutter emails me about 9/11 – there were NO Iraqis involved in that attack. And there is still no established link between Hussein’s regime and Al Quaeda. Although you can bet they’re recruiting in Iraq now.

I’ll leave the final words to the new Spanish leader:

“You can’t bomb a people just in case” they pose a perceived threat, Zapatero said in statements just five days before the first anniversary of the March 20 start of the war.

“You can’t organize a war on the basis of lies,” he said, alluding to Bush’s and Blair’s insistence the war was justified by their belief — so far unfounded — that Iraq had weapons of mass destruction that posed an imminent threat.

“Wars such as that which has occurred in Iraq only allow hatred, violence and terror to proliferate.”