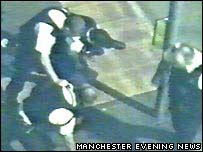 “An inquiry into an alleged assault by an officer in Manchester, which was captured on CCTV, is to be supervised by the Police Complaints Authority.

I’ve just seen the CCTV footage and there’s no apparently about it. You can clearly see a man on the floor, his hands cuffed behind him. Then you can see two of our brave, noble British bobbies holding him down while a third repeatedly kicks him in the back and head. Then a clip showed them bundling him into a van, deliberately banging him against the top of the doorway.

Doesn’t it make you proud? We’ve got the best police force in the world. Unless you’re black, of course. Then they’ll just beat the shit out of you even when you’re already handcuffed and on the floor. Oh, and they don’t like Asians much either. Or Irish. Or gays. Apart from that, you should be fine though.

“Sometimes people just need a beating.
Blacks, Asians, Irish, queers. Not one-on-one of course: they might hit you back. So you need a couple of mates to hold the bastards down.
I don’t know if I could lay into a man as he lay, handcuffed on the floor, unable to defend himself. Could you?”

The British Police – fancy beating the shit out of people and getting away with it?