Recently, it’s like the multiverse has been conspiring to make me miss living in Norwich.

First, I bumped into Pollie,

who I’ve not seen in years. I met her when I started at UEA in ’98. She took me under her wing (which would startle you if you could see our relative sizes) and was one of the first friends I made at Uni. We spent many hours skiving off in the bar before I, somewhat inevitably, dropped out.

Then, last Saturday I went to see Bearsuit, again at the Rescue Rooms.

I remember Bearsuit forming and going to see one of their earliest (maybe the first?) gig in the bar at Norwich Arts Centre. Lovely bunch of people, even if they are all porn-obsessed crack whores. Seeing them reminded me of the Arts Centre and then of St. Benedicts street (where I used to live) and the crisp, clear Norwich winters. So cold your eyeballs would freeze but you could still see the piercing blue skies.

And then, walking around Derby today, I noticed that the big, stupid metal gate thing that used to be near KFC has gone: 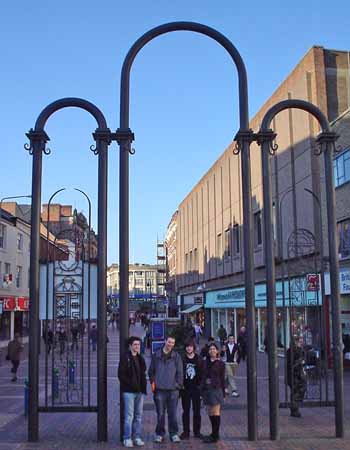 This was the final straw in my nostalgic reverie.

How long was that fucker up? Why has it gone? How much did it cost, to put up the pointless obstruction and then tear it down?

To me, that gate sums up Derby in terms of infrastructure. Derby – great people, cool bands but as for city planning… Here’s a new slogan Derby City Council can have from me for free:

Just as I left Norwich, they’d opened the new library to replace the one that had burned down. Here’s a couple of pics of it:

I loved the new library – it was clean, spacious, welcoming and, most importantly, very quick to use.

I know some Norwich residents have moaned about the shops in it, the design etc but, hey, it could be worse! You could live in Derby where nothing is ever finished, where every new building looks like it was designed by Fisher Price and where the whole city centre is a permanent fucking building site.

Structurally, every city has its own spirit, its own sense of purpose. If Norwich is like a dolphin, carving through the Pacific with streamlined beauty and efficient playfulness, Derby is like an asthmatic wildebeest, pausing to cough at a muddy puddle before falling in. It probably tripped on a roadworks cone:

This is not an anti-Derby rant. I grew up in Derby, it’s my home town and I love it as much as Emily loved Bagpuss, despite him being baggy and a bit loose at the seams.

But, for as long as I can remember, it’s been ill-served by its politicos. We’ve seen the city stumble from one botched project to another. Where we used to have the Cockpit car park, we now have the mother of all carbuncles, squatting like an immense concrete toad that’s holding Derby to ransom. What message does this send out to people arriving into Derby by one of the major routes that converge there? Welcome to Derby: we’ve got more car parks than trees!

I think we’re so used to civic ugliness that we now take it for granted. That’s what surprised me about living in Norwich: things just get planned properly and then done, with grace and style. Apparently, they have adults in charge over there.

Tomorrow, I’ll wake up to another day in a city of concrete and roadcones. But tonight I’ll dream… 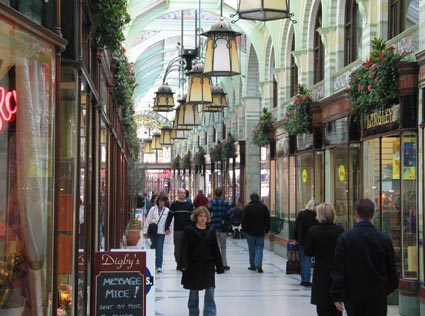 …of the Royal Arcade…

…and the Sainsbury Centre.