(This article was originally written in 2003, update at the end!)

It’s 3.33am. I should be asleep, tucked up and dreaming of Crimbo pressies.

But I’m still up and wired from DJing, which I got back from three hours ago.

Like most DJs, I started off as a kid by taking records to parties. I was the fat geek at school, I loved music and so had loads of 12″s and stuff I nicked off my big sister. I remember I even used to take my tape player in every day to Woodlands and play it in the Pen (our playground). Music always meant more to me than football. More than anything, apart from girls.

I first started doing paid DJing in around 1987. Just some parties for mates and other one-off events. Eventually, this lead to club DJing and that’s how I became a Superstar DJ, hanging with Seb Fontaine and Judge Jules down Fabric before getting jazzed up on cake in the bogs.

Y’see, I’ve always done alternative DJing. By which I mean that I most enjoy playing music that people haven’t heard before. I have DJed mainstream Saturday nights but that’s not such a thrill for me. I’d say it’s equivalent to the difference between working as a chef in a fine restaurant or slapping a Big Mac on a tray.

Don’t get me wrong: I love pop music. I just have a broader definition of it than most people. Pop music is anything I like a lot. It’s a radically hypersubjective genre. Yes, the Beatles and The Darkness are both great pop bands. But so are Venetian Snares and Komeda. It doesn’t matter whatever sub-genre an artist works within, pop is the best of that genre.

Sooo…. you don’t actually make much money by playing less well-known music. The big money is in giving people exactly what they want. No surprises, no difficult bits. No light and shade. Tabloid DJing. That’s why there aren’t any superstar alternative DJs: they’d clear the floor by sticking on The Red Army Choir and then get the sack. Anyway, I’m rambling as usual…

I think everyone should be a DJ

Music is too important to be left in the hands of a powerful minority. I’d love to see that change, to see DJing become a much more common occupation. Instead of background CDs in pubs, that could be a DJ, actually reading the punters and playing stuff that would enhance the evening.

The main thing that prevented this in the past was money. It simply cost too much for the average person to get a set of decks, mixer, flightcases and adequate transport for this volume of paraphenalia. And that’s hoping the venue supplies a proper PA.

That’s why you should be a laptop DJ.

Forget vinyl. Unless you’re actually in The Invisible Scratch Pickles and using the vinyl creatively, what’s the point? If all you’re doing is fading down and fading up, switch to mp3.

Get yourself a small, light laptop. I use a Panasonic Toughbook: 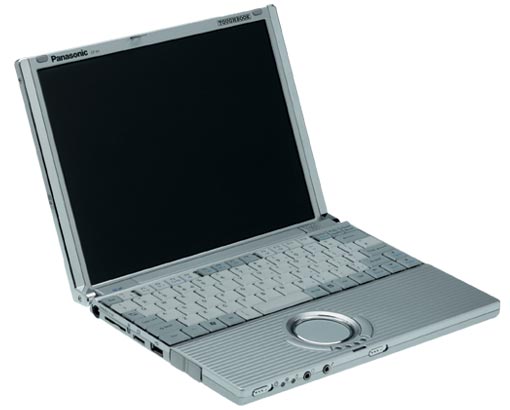 Although I’m a Mac fiend, I went with the Toughbook cos it’s soo diddy and light. This means that I can pop it in my rucksack, complete with a few leads and its PSU and the whole lot weighs next to nowt.

On my laptop, I run Winamp (2.78) with the WinCue plugin. This makes for an amazingly fast and responsive DJing system. If someone asks for a band, I just tap their name in the search screeen of WinCue and up they come, instantly.

This is the liberation of mp3 DJing. Whereas before I’d have to lug round boxes full of vinyl or CD, most of which I’d never play but I had to have just in case, now it all sits on my hard drive. Currently, I’m DJing with about 2000 songs in my music folder. Seeing as I used to play maybe one track off every CD / 12″, that’s the equivalent of me hauling 2000 records every time I DJ.

But I just pop my laptop in my rucksack and toddle off. It’s lovely.

It means I have more choice of music at my fingertips, the ultimate desire for every pro DJ. If someone comes up and asks me for Atreyu or Teddy Pendergrass, I probably have at least one track by them somewhere.

It also means I can read and react to the crowd in a far more fluid way. Hmmm… so people are nodding their heads to Hrvatski? Maybe I’ll stick some Cylob on? Did I bring any out with me – of course I did because it takes up zero space!

You can take more risks, change what you’re gonna play in an instant when you’ve had a last second brainwave in a way you never could with clumsy CD or vinyl. It makes normal DJing feel like trying to make love through a duvet.

And you don’t need an expensive, new laptop – I just like shiny gadgets. Playing mp3s doesn’t take much computer power at all so you could easily use a laptop that’s three or four years old. If a modern laptop can cost as little as £600, a second-hand job a few years old could be yours for a snip. (I know old laptops can do the job because I’ve been laptop DJing for at least three years now.)

So, for maybe two or three hundred quid, you can become an independent DJ. No decks, no mixer, no massive volume of largely redundant music media, all you carry with you is the most important thing: the music.

It’s time to abandon our fetish for vinyl or even (some DJs have it!) our fetish for CDs. Like I said, if you’re a hip hop DJ or doing something truly unique with your slabs of plastic, none of the above applies to you. You need the physicality of vinyl.

But that isn’t the vast majority of DJs, most of whom don’t even beatmix records. They have an unjustified vinyl / CD fetish. Destroy that obsession and instead strengthen your obsession for the music itself.

I would love to see a flowering of DJs, kids hopping onto buses, trains and planes, unencumbered by flightcases and shit. Liberated to spread music to places which wouldn’t normally have a DJ because of the implied hassles.

I don’t care what music you want to play, just get out there. Get out of your bedrooms, get off your arses and start spreading the music you love to as many people as possible.

Well, it’s now coming up to five years since I wrote the original post above. What’s changed in my DJing setup?

I’ve kept trying every new bit of DJ software that comes out and I’ve always returned to the Winamp setup I detailed above. Why?

All the other pieces of DJ software I’ve tried have been too complex, too bloated and trying to do the old “two decks + crossfader” paradgim. I don’t want to see all that shit – I’m on a laptop. If I wanted two decks and a mixer, I’d use them. Since I’m not beatmixing, all I want is robust, simple cueing and crossfading. Oh, and a great search function.

While there are some very slick packages there, I’d advise the newbie laptop DJs to never pay before you’ve test-driven the app. I’ve tried out programs that cost over a hundred quid and they’ve crashed out after only an hour or two. To do a proper test, I’d say do a trial set at home of no less than four hours. Remember, you do not want the program crashing before an audience. There is nothing more frustrating than waiting for a re-boot of app or laptop during a set. And you probably won’t get booked again.

The other thing I’d say is crucial is the intelligence of your crossfade. If you only ever do manual crossfading, there’s no issue. But most of the time, I let Winamp do the crossfading. And it never fails me. I can go from a 55-second Minor Threat track with a sudden start, sudden end into a floaty dubstep intro and the transition is slick and professional sounding. Providing you know your music (which, after all, is what you’re getting paid for), you’ll never get tripped up.

I wish I could say the same of some big-name, pro software. I’ve tried out some packages and the crossfading is simply horrible. Chopping off the last beats of rock songs, chopping out the ambient intros of electronic tracks. These apps expect you to go through every single track in your library and mark start and end points.

I’m meant to go through 6000+ tracks and mark ins and outs because you can’t program an intelligent crossfade?? Yeah, right…

So, beware of any apps that use up hours of your time because they didn’t spend enough of theirs on the coding.

As for platforms, I remain, after nearly a decade, a PC user for laptop DJing. In the rest of my life, I’m a Mac head. I’m typing this on a Macbook Pro, my studio has a shiny, new Mac Pro 8-core in it. I love Macs, I love OSX!

But the sad fact is that there is no Mac app as slender, functional and reliable as Winamp 2.78. Believe me, I’ve looked!

My current laptop computer is an HP Pavilion TX1000: 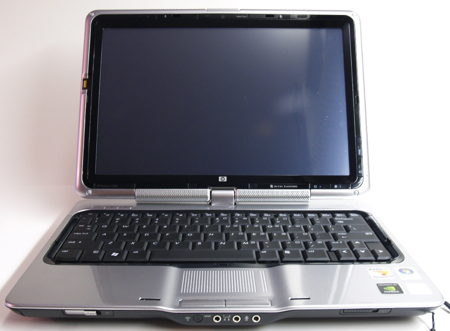 It’s immensely over-powered for what I’m doing on it but such is the rate of progress in computer power since ’99. I had to wipe nasty Vista and put lovely XP on it to get the version of Winamp I use (and the plugins) to work but apart from that, it’s been fine.

What I said at the end of the original article, I feel even more now. I’m 42 and I can’t remember a time when the mainstream charts, radio and TV had worse music on them. It wasn’t even this bad in the late ’70s, pre-punk.

At the same time, there has never been so much stunning new music available. Every week, I discover new artists who just blow me away. They’re all independent so they won’t ever get on the mass media. So most people will never get to hear them.

This is why I still DJ. Being able to play these artists to people who are looking for something a little more is a privilege and a great source of joy. There is still nothing better than playing a new track and having someone come up excitedly and ask who it is.

If you’ve read this far and you aren’t already a DJ, what are you waiting for? Get a laptop, book a night at a venue and get going.

If you love music, share that love with other music lovers!