RED ALERT!
Please be aware that we are now at RED ALERT status due to the possibility of terrorist attacks by the notorious group known as the ‘USA.’ The USA is the group involved in the recent terrorist invasion and occupation of Iraq, launching thousands of missiles and other WOMD at defenceless civilians. It is estimated that this murderous attack killed in excess of 5000 Iraqi civilians but we may never know the true death toll. This terror group has also been involved in the kidnapping and imprisonment of children at its internment centre known as ‘Camp X-Ray.’

The USA group justified this terrorist attack by citing their ‘jihad against terror.’ Obviously, since they are saying they wish to stop the bombing of innocent civilians by bombing innocent civilians, one can see the level of insanity and total contempt for human life their leadership possesses.

The USA group has also been involved in the training and funding of these terrorist leaders: Pinochet, Marcos, Batista, Franco, Noriega, Suharto, Botha, Duvalier, Martinez and many others. It was the USA group which installed the terrorist Saddam Hussein and supplied him with the materials and funding he used to gas the Kurds.

Below is proof of the long-standing friendship between these two terror groups: 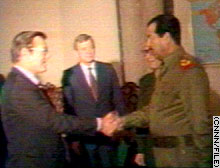 Above you can see the hardline USA terrorist Rumsfeld shaking hands with partner-in-crime Hussein.

The USA group purports to represent the American people but this is a slur on the many peaceful, non-terrorist Americans who disavow the actions of this clique.

There is speculation that the USA group is embarking on this new spate of international murder in order to extend its realm of influence and also gain access to valuable oil reserves. The group has already started targeting countries such as Iran and Syria in its propaganda campaign, aided by its heavily censored media (NBC, ABC, BBC, Sky). This censorship extended to the deliberate targeting of non-compliant media, as in the shelling of Al Jazeera in Iraq and the Palestine Hotel (two journalists killed, more injured).

Here is the leader of the USA group: 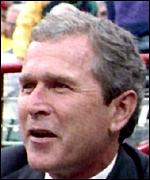 Bzangy Homeland Security received this email shortly after issuing the above alert:

I was fascinated by your latest editorial warning of the activities of the rogue state USA. Although I whole-heartedly concur with the points you raise, I feel moved to correct a slight factual error. The individuals kidnapped by the USA have been moved to another Cuban location, Camp Delta. Presumably the conditions in aptly-named Camp X-Ray were too visible to outside observers.

Keep up the good work.