Got this today and it’s ACE!

It’s a collection of fourteen of Hrvatski’s tracks going from 1994 up to 2002. The style is very glitchy and groinky but it’s not as cerebral as I find a lot of <cough> IDM to be.

‘Vatstep dsp’ kicks it off and what a great start. After some 35 seconds of drilling-through-breezeblocks noise, the beat kicks in and we have that now famous singer Mr. Crooning Macintosh, as previously heard on Cylob’s ‘Rewind’ (although that was recorded after this ’99 track, I think). There’s mad breakbeats, obligatory Metasynthing but the genius touch is the cat miaowing. Class!

The cover of ‘Paint It Black’ perhaps stretches the definition of ‘cover’ but behind the doleful twanging, you can make out someone singing it so I guess it passes. Sounds like a solo Thurston Moore piece, but less jazz-funk.

‘2nd Zero Fidelity Mandible Investigation’ is a slippery bugger. Starts of with some very Pink Floydy piano chords and then goes mental breakbeat before a tasty whistling solo! Yes – there should be MORE whistle solos in serious blokes-with-laptops electronic music. But then Hrvatski gets bored again and bungs on some even stupider breakbeats that make most gabba sound sedate. It ends rather sedately.

That’s the thing about this album – you can’t skip through it or you’ll miss some lovely pearls of sound. I’ve listened to it about three times all the way through and there’s new little bits I hear every time.

Another top tune is ‘Marbles’ which sounds to me like it was nicked off the seminal ‘Marble Madness’ but is apparently, according to the liner notes, nicked off a Gameboy game. It’s very funky and I guess, next to ‘Vatstep’ the track I’d most play when DJing. It’s got that lovely, grungy cheap synthchip sound to it. And a kicking beat. Mmmm…

‘Echoes’ sounds very much like what it is: a piece of academic electroacoustic music. It’s basically piano(s) recorded and echoed, the echoes making up quite complex rhythms. Quite compelling, in a ball-bearing-falling-into-some-eggcups kind of way.

Now ‘Ewc4’ is a different beastie altogether. Starts off with sampled chugging metal guitar before several different breaks come in, at half, normal, double and quadruple tempos. Then they fade and what’s left is some Satie-esque electric piano chords.

‘Gemini’ sort of carries that on. It’s a sweet piece, chiming, pentatonic melodies that are a bit folksy/Boards of Canada-y which get chopped-up into little trills and stutters.

‘Carrot’ opens with an acoustic guitar riff and again, it’s a simple, plainly beautiful song. The melody is carried on by electric piano again before some beats skitter in… just when you think it’s fading, it goes a bit cyberdub. Then filtercyberdub before closing with the riff that opened. Nice.

The album closer is ‘Tegenborg’ and according to the liner notes, it’s based on a track by a Swedish prog group called Trad Gras Och Stenar. This *may be* Hrvatksi taking the piss – I’m not up on prog enough to know. Whatever, it’s a rocking track which to my ears sounds like J.Mascis pissing round with Squarepusher on drums. If you like feedback, you’re gonna love the end of this…

Please check out samples of the tracks here and you’ll see I’m not demented and that it is great stuff.

My overall fave on the album is ‘Vatstep’ just cos it makes me smile and dance and feel very happy.

Buy this album if you like stuff like Kid 606, Wauvenfold, Boards Of Canada, Funkstorung or Jake Mandell. Don’t buy it if you think it’s a crime for electronic music to have a sense of humour,
love and kisses,
Jyoti 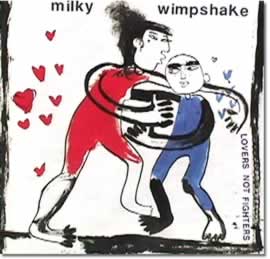 For those who haven’t heard them, MW excel at punky, poppy songs with lyrics that always provoke you, even if that sometimes mean they irk
you.

I stuck the album on and straight away it cheered me up. I guess some people might think it’s a bit retro indie but in these days of faux garage and Pro Tools punk, it sounds fresh to my ears.

I really, really, really like the lyrics. Some of them are a bit Half Man Half Biscuit but with a streak of lefty nastiness that I love. Less ironic and distanced, more taking the piss.

This is my fave lyric, taken from the eponymous song:

Please go out and buy it / bug your local indie shop to stock it. If you can’t find it in a shop, try here:

If you like The Buzzcocks, The Brilliant Corners or have a secret fond place in your heart for The Pooh Sticks ‘On Tape’, you’ll probably love this record,
love and kisses,
Jyoti

This morning, I got one of these gadgets delivered:

It’s basically a doodad to play mp3s off any designated drive/folder on your LAN… so my big PC which has all my CDs on it (around 1500 now in mp3 form) is now the music server for my house. It’s a noisy bastard but that’s fine cos it’s now humming away in the next room and my sitting room is quiet enough to do Segovia justice.

The SliMP3 comes with a little remote control which lets you browse through your music folder, make playlists and do all the usual stuff.

All you do to configure it is plug it into your router (or straight into your PC’s NIC via crossover Cat 5) and then it works out everything by DHCP and connects to the server app anywhere on the network. Oh, and it can play net radio stations too, which is finally useful to me now with broadband…