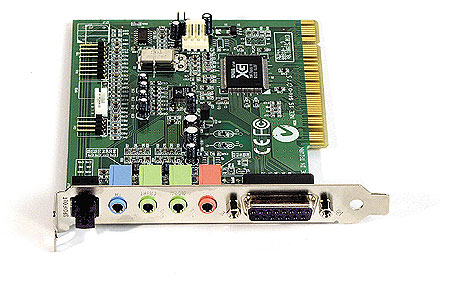 My favourite ever PC soundcard was the Yamaha SW60 XG. I bought one in 1995 and was immediately seduced by the hardware XG synth built into the slim darling. I loved the crispness of the XG sounds. Back then, they were the cleanest synth sounds I had access to. I even did a whole track on my second album purely using the soundcard (the American Sitcom instrumental).

Then, I moved into the Macintosh music world, leaving behind the vagaries of IRQs, DMAs and bizarrely non-repeating fatal errors.

Last year I dipped a toe back into PC waters. I bought a system, thinking that PC tech must have improved so much that the soundcards I could buy would be brilliant. But I was wrong.

The major thing that contemporary PC soundcards are based around is providing multi-channel cinema sound. The MIDI synth capabilities seem to be left far behind in the race for immersive game sound environments. I was appalled that most soundcards used bloody wavetable softsynths for their MIDI sound generation.

I’ve always hated these implementations. I don’t know why because they should, ostensibly, sound as good or better as hardware synths since they’re sample based. But every non-hardware PC soundcard synth I’ve heard sounds terrible. They have this kind of hazy, slow sound to them. The transients on drumkits are dull and muffled. The pianos don’t breathe at all, every sound is glassy and unconvincing.

That’s why I was so pleased to discover this soundcard, reviewed in a PC Pro article. I had been about to bite the bullet and fork out for a Yamaha SW1000XG, purely for it’s XG facilities. But I’d been hesitating because all I wanted to do with the soundcard was listen to crappy XG midi files off the net and do the occasional, non-professional tinkling. And over £400 is a lot to pay just for that.

Then the AW744 Pro appeared and saved my bacon. It costs £19, has a beautiful little hardware synth on board and, amazingly, even has an optical SP/DIF output on it. Now that’s progress! It’s even better than the old SW60XG because, if I remember correctly, you couldn’t route the SW60’s XG sounds to its coaxial digi out, only wave audio. With the AOpen card, you’ve got choices about what goes where. Amazing!

So, if you enjoy listening to terrible XG MIDI files as much as I do, may I humbly recommend the AOpen AW744 Pro. It makes even the worst of versions into pootling little masterpieces.