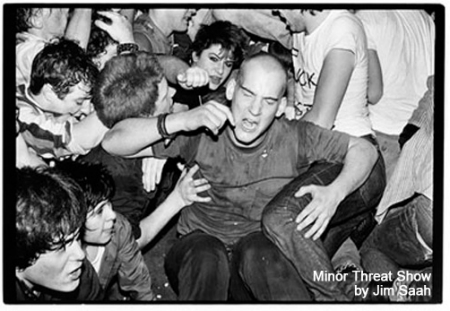 The other night I listened to a documentary on the Steve Lamaq show about Straight Edge. This is the scene that’s grown out of bands like Minor Threat who became disgusted at the waste and un-focussed excesses of punk rock, specifically the drinking and drugs.

They believed that you couldn’t be a rebel if you smoked, drank and did the same drugs as your parents (and maybe even grandparents) did. Perhaps in the sixties experimenting with LSD was revolutionary but by the eighties it had become a mark of conformity and ultimate hippy apolitical sluggishness.

Why bother changing the reality around you when you can just avoid it for a few hours?

The documentary showed that Straight Edge has some negative aspects. What started off as a personal, positive, life-affirming choice seems to have become, for some, a new religion. And all religions are intolerant, exclusive and arrogantly judgemental. What started out as “I have the right to be different” has become “I’m *better* than you.” But, as was pointed out in the documentary, that isn’t all straight edgers. In any scene or movement, whatever it is, you’re gonna get jerks. There’s eco jerks, anti-war jerks and probably even Buddhist jerks. That doesn’t automatically invalidate the original movement’s aims and it certainly doesn’t mean you should judge it by a handful of extremists.

I’ll admit I’ve got a personal involvement here. I started drinking when I was about 13 and, like most young lads, spent every weekend trying to get served in pubs. I’ve lost count of the number of hours I spent hanging around outside off-licences waiting for illicit cans of Red Stripe.

I tried smoking as well but I just couldn’t see the point of it. It was expensive and made you cough. I had also seen what it does to lungs. Both my parents are doctors and I’ve grown up with medical magazines lying round the house, often with pictures of cancer-eaten lungs or smokers with multiple amputations due to thromboses.

When I left school at 16 (in 1982), I went on the dole and soon worked out that I didn’t have enough money to buy records *and* drink. I chose to buy records and gradually I stopped drinking altogether. I even stopped accepting drinks from mates when we’d be out because I knew, eventually, it’d be my round and I couldn’t afford to buy it. (Well, I *could* but I chose to spend that money on records instead.) I also noticed that I didn’t need to be pissed to have a good night out – I could just act as if I was pissed.

I learnt to turn that confidence/stupidity on and off at will, without alcohol. I’d talk to people and they wouldn’t believe I was sober because I was so chatty and relaxed. 1982 was the last year I was drunk and the first year I started consciously thinking about how I chose to live my life. A couple of years later I got involved in organised Trotskyist political campaigning and I see that as directly leading from my early decision to give up drinking, to give up being ‘normal.’

If you don’t drink or do drugs, you have no escape, you deal with life straight. A lot of my mates from school went on to shitty, low-paid office jobs which they hated, joining the white-collar working class. I’d see them out years later, doing the same shit in their mid-twenties that we did when we were kids.

And they all smoked as well. It’s not enough that you’re skint and can barely afford your rent but then you choose to have this monkey on your back where you’re burning money everyday and inhaling the results which are provenly toxic. Why? “Because it de-stresses me.” No – it only lessens your symptoms of withdrawal which you wouldn’t have if you didn’t smoke in the first place. You’re hitting your head against a brick wall because you love the relief from pain when you stop. I guess that’s one way to live your life but not one I’d choose.

The sad thing nowadays is how many women smoke. Through the nineties, female smoking seems to have exploded. Despite all the dire health warnings and already elevated cancer risks, a lot of women are choosing to ingest a known carcinogen. Why? Some of my female friends say it’s because fags suppress their appetites. I can’t believe this – can women really believe they’re immortal to this degree? Does it matter so much what you look like on the outside that you don’t care about the clumps of cancer cells you’re breeding on the inside?

I’ll admit, as a marginalized, abnormal person, I can’t think of one reason that sane, educated people smoke. I don’t want any of my music used to advertise cigarettes and some has recently, without my permission. I’ve asked Universal how this has happened and asked them to stop the usage but I’ve heard nothing in reply. Another reason not to deal with major corporations – they don’t give a crap about their artists’ ideals.

So does the above rant mean that I call myself a Straight Edger? No. For one thing, although I love Minor Threat and punk in general, modern SE hardcore leaves me totally cold. It’s basically metal, with loads of widdly-widdly soloing and indecipherable bellowed or grunted lyrics. And it’s insanely aggressive and macho. I prefer my music a lot gayer (in both senses of the word) and intelligible.

Although the political people in the scene say they’re anti-racist, anti-sexist and anti-homophobic, the scene is white, male and very, um, straight. It’s a teenage boy’s ideal of manliness, all chest-beating and air-punching. I’m 34, I know that being a man is only partly about aggression and strength. As for being better than drinkers – how is getting pissed and getting into fights with your mates any worse than going to a gig specifically to mosh and kick the shit out of people? I’m not saying all aggression is wrong but I do dislike this very laddish, corny, macho-man shit.

I also have a problem with some of the imagery and aesthetic of the modern hardcore/SE scene. All this ‘True till Death’ crap, all the rhetoric about ‘purity’and ‘strength’, it’s all a skip away from classic Nazi and fascist imagery. Although the politics are meant to be the opposite, the feel is scarily similar. Now, if there were a few SE bands around with names like The Gayboys or Big Girls Blouses, I might feel a little happier. But the names are nearly all one word markers of heroism and strength.

So I’m in the weird position that I don’t smoke, drink or do drugs (and haven’t for the last 18 or so years) but I choose not to call myself straight edge. Oh sure, I’ll use it as shorthand (saying, “I’m straight edge” is a lot shorter than saying “I don’t drink, smoke, do drugs but it’s for philosophical not religious reasons”) but I’ll always qualify my usage of the term. My basic thing is that these are personal, political and philosophical choices I’ve made, for *myself*.

If you’re reading this and you’re a smoker/drinker/toker, don’t think for a minute that I believe I’m better than you. I know I’m not. I’ve just chosen to live my life differently. I do believe that if people chose to live a drug/drink/smoke-free life that they’d be happier, but when it comes down to it I’m not gonna preach because I could be totally wrong.

It’s certainly a harder path to follow because you’ve got no crutch to fall back on, no sweet oblivion to escape to if things are going badly. But just cos it’s the harder path doesn’t mean it’s the better one, I’m not a fucking monk thinking my hairshirt makes me holy.

I’m an atheist. I believe I’ve got the one life and I’d like to experience it as clearly as possible.