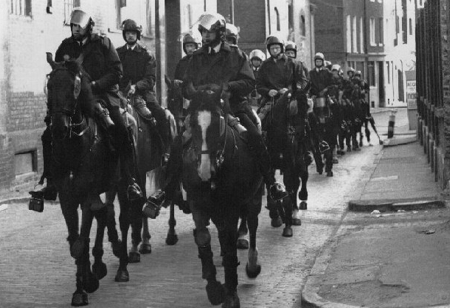 Whenever I get up, my right knee clicks like a couple of walnuts coming to a bad end. This alarming noise can be traced back to one night in 1987 when I was almost trampled by a police horse. Okay, it wasn’t that close but have you ever been chased by a copper on a horse?

I was in Wapping, down to take part in the night picket of Rupert Murdoch’s News International site following the mass layoffs of printworkers. The Metropolitan Police were being their usual tools-of-the-state, lines of them goading on the pickets from behind the safety of their riot gear.

This was one of the last big British left-wing demonstrations of the eighties and, as it turned out, that century. As well as the Militant Tendency (which I was in), the SWP were there, along with the WRP, ICP, SO, SA, Class War, Black Flag and of course the Judean People’s Front. There were at least seven flavours of Trotskyism, various anarchists and probably even some Maoists. News reports would later accuse lefties of hijacking the picket (as they always do) even though the print unions wanted a mass-picket and we were, in fact, invited.

I ended up about forty metres from the road entrance to the factory which was being guarded by Met coppers bunched-up in lines. The front ranks were sub-organised into snatch squads, ready to lurch out as a unit if provoked. But nobody was provoking them. The mood was generally very positive rather than angry. The families of pickets were alongside them, kids and all, and everyone looked slightly startled that so many people had bothered to turn up. The only trouble the police were getting was the occasional jeer and obligatory oinking.

I noticed several blokes come up to the front. They had their faces covered with scarves so I assumed they were anarchists not wanting to get their piccies taken by the Met. Looking again, something seemed a bit wrong about them. Anarchists, being so individual, all tend to dress alike and this group weren’t wearing the mandatory Wolfie Smith gear. They dispersed through the front edge of the demonstration, all the while signalling to each other.

I didn’t see the first rock they threw, it was over the other side, away from me. I did see the copper whose riot shield it hit fumble and fall out of formation. I couldn’t watch him longer as right in front of me, another of the fake anarchists launched his own missile, quickly followed by his mates. Again, these bounced off riot shields, no human damage done.

Then everything seemed to go crazy. The front lines of coppers broke away in their squads and I was thinking, “Those fuckers are gonna get it now.” Only they didn’t. As the snatch squads approached them, the blokes who’d thrown the rocks stood absolutely still and shot their arms straight upwards, palm forwards. How weird is that? Would you do that, with a group of pissed-off and heavily belligerent coppers running at you? Let’s say you even had an immediate and deep pang of remorse for trying to brick a copper, would you hang about to express this change of heart?

The snatch squads ran around the provocateurs like water round rocks in a river. They latched onto anyone in their immediate paths. About twenty metres away from me, I saw a copper catch hold of one of the picket’s kids. I think it was a boy, about nine or ten. The copper had this look on his face which was almost blank. Not scary or evil, simply neutral as if he was typing or making a cup of tea. He held the lad with his left arm while his right arm brought the truncheon down on the lad’s head methodically. Trained aggression.

I couldn’t hear the sound of the impact from where I was but I saw blood spring from the child’s head. At first I thought it was a bit of hair which had momentarily flicked up but then I saw it coat his forehead. I heard the kid squeal. It was a horrible noise. The copper bashed him a couple more times for the sheer fun of it and then let him fall to the floor. The whole thing was over in perhaps four or five seconds though it seems longer when I remember.

As the snatch squads retreated, some of them dragging bleeding protestors with them, the police horses came out. That’s when pretty much my whole section of the crowd decided it would be better to run like fuck. Well, as you probably know, I’m not of an athletic build but my terror managed to propel me. I was moving along quite well until I suddenly found myself on the floor, eating the pavement. I’d tripped on a kerb, landed on my right knee and then bashed my head onto a paving slab. When I looked back, the horses had already backed off. I stood up and inspected my knee. It was already swelling. I’d got off bloody lightly compared with that little kid and the other victims.

None of this is made up. You have to understand that under Thatcher, the police became one of the most vicious political forces known in British history. Ask other people who were at Wapping that night. Or at Orgreave during the miners’ strike.

Now it’s over a decade later and there’s a Labour government in power who seem to delight in cant, spin and out-Torying the Tories. Meanwhile, my knee still gives me trouble…